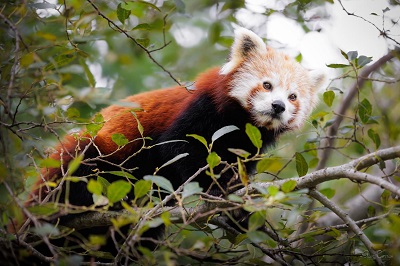 An endangered panda, born on the Isle of Man, has been successfully moved to an English zoo as part of an international breeding programme.

Two-year-old red panda, Aria, has taken up home at the Birmingham Conservation Park after being safely transported by her keepers this week.

Aria was the first cub born to dad Kush and mum Sara at the Curraghs Wildlife Park in 2020.

‘There are always mixed emotions when an animal moves on. We have loved and cared for Aria since day one and we are all very proud that she will now play an important role in the conservation of her species.’

It is hoped the Manx panda will be paired with a male panda at the zoo, called Monium, as part of the European Association of Zoos and Aquaria programme, which see hundreds of zoos working together to protect the species.

In recent years the Park has raised more than £6,200 for the Red Panda Network, which helps protect red pandas in Nepal.

‘We link the breeding programme of these animals to conservation work in the wild, where there could be as few as 2,500 left in the wild and the Park is proud to have made a difference for this declining species.

‘Aria’s move comes just days after International Red Panda Day was celebrated all over the world so hopefully this will raise further awareness for this remarkable species.’

The Curragh’s Wildlife Park is still home to three red pandas, including two fathered by Kush, along with more than 70 other species of animals and birds.