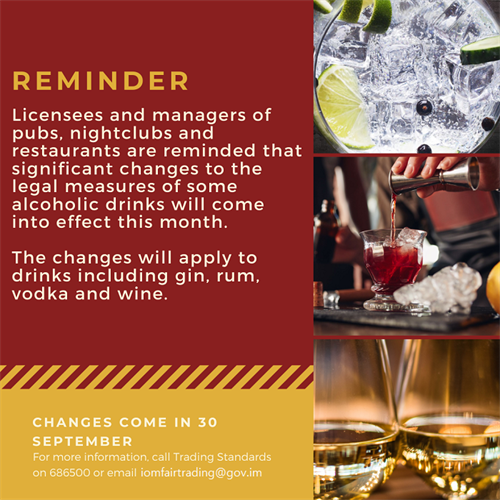 The hospitality industry is reminded that significant changes to the legal measures of some alcoholic drinks, served on licensed premises, will come into effect this month.

The Weights and Measures (Intoxicating Liquor) (Amendment) Order 2022 will mean smaller quantities of certain drinks, such as wine, gin and vodka, can be served from 30 September.

The Isle of Man Office of Fair Trading (OFT) is reminding licensees and managers of pubs, nightclubs, restaurants and other licensed premises to prepare and alter prices accordingly.

The changes apply to the following drinks, when sold for consumption on licensed premises:

The law change regarding spirits follows feedback that it is increasingly difficult to track down the correct measuring equipment, as most other jurisdictions already use metric.

The changes to wine and fortified wines promote sensible drinking.

‘We recognise the argument to retain the Isle of Man’s uniqueness and in normal circumstances would wish to retain it.

Traders can discuss the changes and seek advice by calling Trading Standards on +44 1624 686500 or emailing iomfairtrading@gov.im