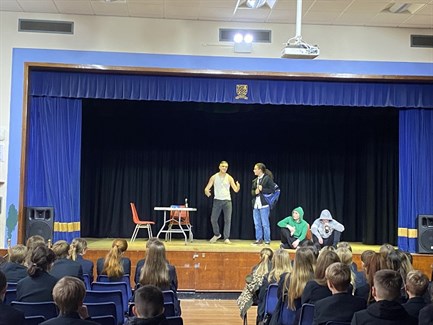 A ‘drop down’ day of workshops, educational theatre and group discussions will teach children how to recognise and report criminal exploitation.

Over the next twelve months all Year 8 students across the Island will take part in the ‘Pause…You Matter’ scheme. The multiagency group behind the scheme aims to raise awareness of what exploitation is and to dispel myths about criminal activity.

Year 8 students at Castle Rushen High School were the first to take part in the scheme this week.

For their first session the year group watched the Kensington Arts Theatre in Education (‘TiE’) play ‘Trapped’, developed with input from the Isle of Man Constabulary and supported by the Isle of Man Arts Council to focus on the issues around exploitation of young people on the Island.

One of the Year 8 Students said:

‘I found the day really useful because it focused on us and keeping us safe. The play looked at a real situation someone could get into, and it’s important for us to know how to deal with that. It’s been good to learn in a different way.’

The students then took part in five different workshops from Kensington Arts, Isle of Man Constabulary, the Isle of Man Prison and Probation Service, and the LoveLife team – looking at practical advice around exploitation and custody as well as our own identities and values.

‘We know that there are children on our Island who are at risk from criminal or sexual exploitation, and it’s our duty to safeguard them and provide them with the tools and support that we can to protect them.

It’s great to see this collaborative approach to education and I hope this new interactive scheme will help raise awareness of the realities of exploitation. Thanks to all of the agencies involved in making these days happen.’

The group behind the scheme are made up of the Department of Education Sport and Culture, the Police, Prison and Probation Service and the LoveLife team.