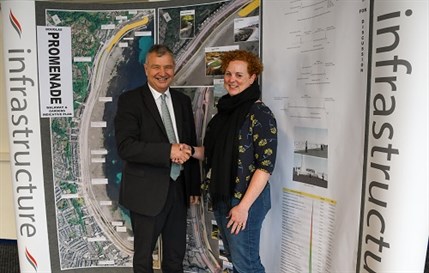 Public displays showing the work that’s under consideration on Douglas’s promenades are now available to view at the Sea Terminal and Town Hall.

The displays are a collaborative exercise between the Department of Infrastructure and Douglas Borough Council, and set out the different elements that could be completed by both organisations, depending on priorities, budgets and programmes in coming years.

A range of projects is included with the aim of providing an understanding of how the promenades could eventually look, and the scale of what is involved in making the most of the seafront.

A major piece of long-term infrastructure shown is the rock defences placed on the shore between Summerland and Summer Hill to protect the highway, reduce overtopping and reduce flood risk.

Work being undertaken by Douglas Borough Council focusses on revitalising the six Marine Gardens on Loch Promenade, including a new playground and water feature, a multi-sensory garden and a play garden, as well as more usable public space on Queen’s Promenade gardens. In addition, the area around the War Memorial will be improved and a new seating arrangement with easier access to the walkway installed at the Jubilee Kiosk.

Running horse tram tracks between Broadway and the Sea Terminal is designated on the plan as heritage, in line with Infrastructure Minister Chris Thomas MHK’s intention to hold talks with relevant bodies about funding the tramway.

‘I’d encourage all Island residents to come and take a look at the displays and what the future of our promenade might be in coming years. Douglas Borough Council and the Department of Infrastructure have worked together to co-ordinate plans to get the most out of our constrained budgets in the public interest.’

‘Douglas promenades are great places for people to relax, exercise, socialise and enjoy the Green Flag award-winning Marine Gardens. Please do come and see the plans we have to help protect and invest in their future.’

The displays will be available to view at the Sea Terminal and Town Hall into the new year.