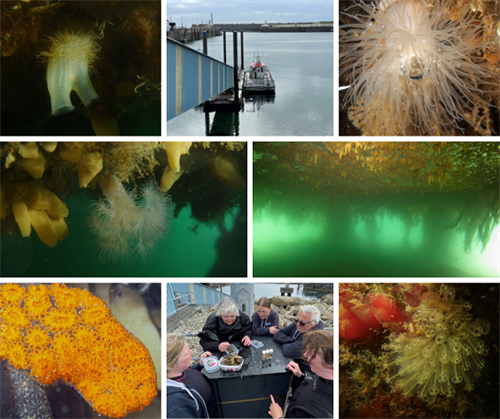 A group of wildlife experts has carried out a rare dive in Douglas harbour to examine a floating pontoon for potentially costly and damaging invasive non-native species (INNS).

It was organised as part of INNS Week, which raises awareness of the dangers invasive species pose to biodiversity by outcompeting native wildlife, damaging infrastructure and in some cases, spreading disease.

The bustling harbour is considered a high risk location and worthy of monitoring for marine INNS, as boats can carry and spread unwanted sea creatures without knowing.

The team of six divers, representing the Department of Environment, Food and Agriculture (DEFA), Manx Wildlife Trust (MWT), IOM Seasearch, and Discover Diving was especially on the hunt for an INNS of sea squirt, which had been previously recorded around the pontoon.

‘Invasive sea squirts may sound harmless, but they can be very costly to get rid of if they take hold. In recent years, carpet sea squirt affected Holyhead Marina and cost the Welsh government hundreds of thousands of pounds to eradicate, so it is worth looking at.’

‘On our dive we found the underneath of the pontoon to be encrusted with sponges, nice native sea squirts and mussels and most importantly no invasive species of concern.’

Squirts feed by filtering water, so the movement of the pontoon on the tide, provides a perfect environment for them to thrive and support an abundance of marine species.

‘It was good news that the carpet sea squirts and orange tipped sea squirts we feared we might find were not present, and it was fantastic to see such a diverse range of marine biodiversity, which is an indicator of a healthy and thriving ecosystem.’

The divers did discover one INNS called Sargassum Muticum (Wireweed/Japanese seaweed) in the sand below the pontoon, which is listed on Schedule 8 of the Wildlife Act, but it did not appear to be having a negative impact.

Diving is not generally permitted in Douglas harbour due to the busy and potentially dangerous environment, but the Department of Infrastructure’s Marine Operations Centre made a special exception to facilitate the important dive and ensure the team were safe.