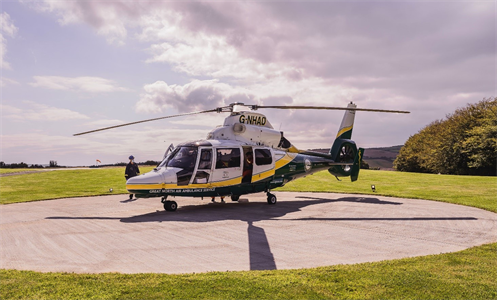 A six-month trial of the Isle of Man’s enhanced emergency air bridge is now underway.

The new Helicopter Emergency Medical Service (HEMS) aims to take patients who are seriously ill or who have suffered a major trauma from the Isle of Man directly to the UK for emergency medical treatment.

This flexible and reactive transfer of patients to trauma or other specialist centres in the North West of England will ensure that those who need off-Island treatment receive it in the shortest time possible.

The Great North Air Ambulance Service (GNAAS) which operates the HEMS service has now completed its registration as a charity on the Island, undertaken simulation and trial flights, and entered into a formal agreement with Manx Care.

The HEMS will also be able to provide more than just a transfer service for the Island. The GNAAS team are highly skilled and experienced in delivery of pre-hospital trauma care, providing emergency treatment including things such as blood transfusions at the scene of traumatic incidents. The crew onboard its helicopters comprises of specialist doctor and paramedic teams to provide support as part of the wider emergency response.

The partnership with GNAAS is a step towards delivering on a key recommendation of Sir Jonathan Michael’s landmark review into the provision of health and social care services in the Isle of Man: the creation of an enhanced emergency air bridge. The implementation and provision of the service has been a key piece of work undertaken by the Health and Care Transformation Team with Manx Care.

The HEMS will operate alongside the existing fixed-wing air ambulance service already provided by Manx Care, and is intended for patients who are likely to need immediate specialist care at a major trauma centre or require specialist medical attention at the scene of an emergency. In the same way as patients are transferred on the fixed wing service, the air ambulance team at Manx Care will make sure any patients and families are supported from point of patient transfer through to their return to Island.

'We’re really pleased that trial of the HEMS service is now underway, as the addition of a helicopter emergency medical service is a great compliment to our existing emergency service provision. Following the simulations and test flights, and the significant amount of work that has taken place in the background by various teams to develop this service, we hope that this will allow us to transfer or respond to seriously ill or injured patients in a more timely manner, which will give patients the best chance of survival and improved longer-term outcomes.'