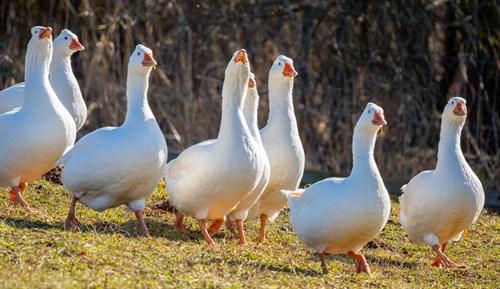 A case of avian influenza has been confirmed in the Isle of Man.

It is the first time the H5N1 virus, which is highly contagious amongst birds but not people, has been recorded on the Island. However, the UK is currently facing its largest ever outbreak, which has led to thousands of farmed birds being culled since November.

The Department of Environment, Food and Agriculture (DEFA) responded on Friday after a bird keeper in Sulby found 11 of his geese dead near a pond on his property.

Samples were taken and sent to the UK for analysis, which have confirmed the geese died from the H5N1 strain.

In view of this, a ‘Protection Zone’ of 1 km (0.6 miles) has been introduced around the affected site, in which keepers must house their birds and must not move them off their property.

An all-Island ‘Surveillance Zone’ has also been introduced and all bird keepers are being advised to house their poultry, practise good biosecurity, and disinfect boots and equipment regularly.

Information regarding the restrictions that have been put in place today by the Department, along with a map that clearly shows the Protection zone can be found online.

‘Due to this positive case we are asking all owners on Island to house their flocks and asking the public not to touch ill or dead birds as a precaution.’

‘Although this virus can spread quickly amongst birds the risk to the public is very low and well cooked eggs and poultry remain safe to eat.’

‘This is an infectious virus which spreads among birds, but it is very unusual for humans to be affected. However, we are issuing the precautionary advice as it is possible for humans to catch the virus through close contact with an infected bird, dead or alive. We do want to reassure residents that the risk of their catching the disease is low and ask that people follow the advice.’

There are more than 20 clinical signs indicating that a bird could be suffering with avian influenza including lethargy, unresponsiveness and a loss of balance.

More information can be found on the DEFA website and anyone who suspects a case, or has in their possession a bird or carcase that they suspect has the disease, should contact the Animal Heath Team by emailing agriculture@gov.im or calling 01624 685844.