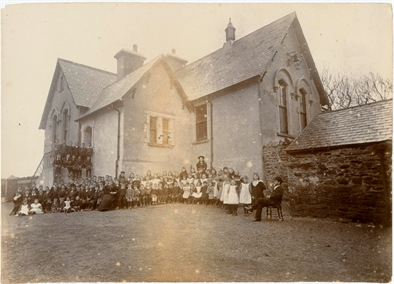 A commemorative booklet has been produced to celebrate the 150th anniversary of the 1872 Isle of Man Act for Public Elementary Education, which expanded education opportunities on the Island.

The 1872 Act was a landmark piece of legislation for the Island, shaping the schooling framework and making education available to everyone.

The 150th anniversary has been celebrated throughout the year with various talks and papers, including a research newspaper developed by the Department of Education, Sport and Culture.

It will also be marked with a commemorative booklet, which was launched on 16 December. The booklet replicates one produced by the then Department of Education in 1972 and includes a small paragraph from each Island school about their history and setting.

In the late 1600s, Bishop Barrow established schools in the Island’s seventeen parishes and four towns. In the early 1800s the parish schools were supplemented by a number of ‘National’ schools opened under the auspices of the National Society for Promoting the Education of the Poor in the Principles of the Established Church throughout England and Wales.

Several of today’s primary schools grew out of the ‘National Schools.’ Other schools were provided privately, or by other religious bodies. By the 1860s, around 50% of children of school age were enrolled in and attending schools.

'We are in a very different place today, than the last time these commemorative exercises in 1972 took place, with many changes within education over the past 50 years. We have seen our schools become ever more embedded within our communities, with their facilities used by numerous sectors of those communities. We work hard to ensure learners are confident in their identities, languages and cultures; including the Manx language; national heritage and culture of the Isle of Man and the commemoration of this anniversary shows just how far education has progressed in the IOM'.

‘The 1872 Act was extremely important for the Island’s children. It expanded education opportunities for all, and laid down a framework for future developments, including the abolition of pupil fees, the raising of the school leaving age, and more and better trained teachers. It is great to see the interest shown by the Department of Education Sport and Culture, Advisory teacher for the Manx Curriculum Jo Callister, all teachers and schools, as well as by Culture Vannin and various Heritage Trusts, in marking the 150th anniversary of this important Act’.

All the commemorative education resources are available to view on the Culture Vannin website.