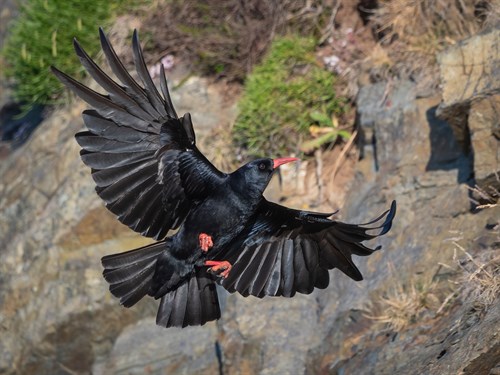 A stretch of the Island’s east coast has been designated as an Area of Special Scientific Interest (ASSI) to protect important habitats and their birdlife.

Numerous species including peregrine falcons, raven, chough and fulmar, use the steep rocky cliffs and diverse coastal grassland, heath and scrub in the area of Marine Drive.

In total, the new ASSI covers around 82 hectares and runs for around three miles between Douglas Head lighthouse and Port Soderick.

It is the 23rd ASSI to be designated on the Island, with other areas including carbon storing upland peat, woodlands and sand dunes - each contributing to the conservation of the Island’s most valuable natural resources by protecting its wildlife and geological features.

Each also plays an important role in the Island’s UNESCO Biosphere status in recognition of their special biodiversity and those designated since 2016 – when the Island became a Biosphere - may be included in the Island’s next appraisal by UNESCO in 2026.

The latest decision to add Marine Drive, which is popular with both people exercising and watching wildlife, to the list was confirmed following a three-month consultation where recognised stakeholders could express their views.

'We are happy to confirm Marine Drive as our newest ASSI – offering greater protection to this biodiverse stretch of coastline and its rich habitat.

'The best way of protecting our plants and animals is to protect the land, the freshwater and the seas where they live. The Department will continue to work hard so that the Island’s most important areas are protected and managed to form a network of natural areas that are capable of supporting our plants, animals and geological heritage into the future.'

The new ASSI, which connects and overlaps with the Little Ness Marine Nature Reserve, includes areas of privately owned land as well as land owned by Manx National Heritage and the Department of Infrastructure.