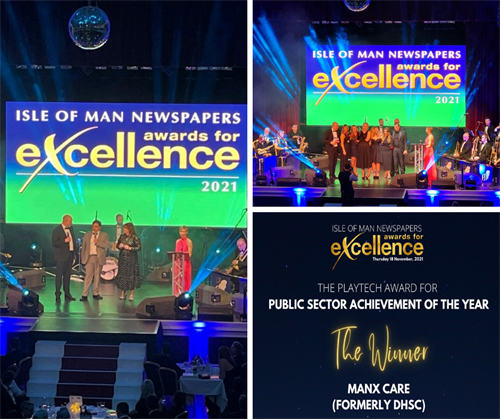 The Island’s health and social care staff and the Covid Community Support team have been recognised for their outstanding service during the 2020 pandemic in the Isle of Man Newspapers’ Awards for Excellence.

The Department of Health and Social Care as it was in 2020 won the Public Sector Achievement of the Year category, while the Teams Working Together accolade went to the Covid Community Support team. University College Isle of Man was also recognised in the awards, presented at a glittering ceremony at the Villa Marina in Douglas last night.

DHSC was nominated in 2020 before last year’s Awards for Excellence were cancelled. Since then, many frontline health and care staff have moved to Manx Care which was created in April 2021. The award was accepted on stage by Emma Cleator, a matron in Community Care, and Oliver Radford, Manx Care’s Operations Director.

The department’s bid was on behalf of staff and services across the entire health and social care system, showcasing the contribution of partner agencies who stepped in to help, and highlighting the work of GPs, pharmacists and other community-based services to ensure care for their patients. The submission included a special mention for colleagues in the third sector, who took on responsibilities in health and care services, freeing-up frontline staff.

Minister for Health and Social Care Lawrie Hooper and former DHSC Minister David Ashford MBE who led the department during the pandemic were present, along with Manx Care CEO Teresa Cope, members of the leadership team and staff, to celebrate the accolade.

‘This award is for everyone in our health and social care services who rose to the unprecedented challenge of the pandemic, whatever role they played. I share the public’s admiration for their commitment and professionalism in such turbulent times. They have done our Island community proud and it is a privilege to have the opportunity to work with such fantastic and dedicated people in my new role.

‘I offer my congratulations to each and every member of the health and social care services on this award recognising their exceptional work over the course of the pandemic and the work they are still doing today.’

The Covid Community Support service was set up at the Welcome Centre to help the public understand the unprecedented restrictions on daily life during the pandemic and to offer support, freeing up the 111 line for medial enquires and police lines for emergencies. Since March 2020, the phone line has received more than 20,000, the team has responded to nearly 2000 emails and spoken to many members of the public in person.

Judges praised the team for providing ‘a calm and understanding voice to concerned members of the public dealing with a fast moving situation.’  The award was accepted by service lead Sarah Reader who was joined on stage by colleagues.

The Chief Minister Alfred Cannan presented the final award of the night, Sharing Our Freedom to Flourish to the Principal of University College Isle of Man, Jo Pretty. UCM was praised for achieving increases in grades in both higher education and apprenticeships, and for growing student numbers.

In his speech at the end of the awards ceremony, the Chief Minister said the evening had been an opportunity to celebrate the incredible way the Island community responded during the pandemic, and thanked all the key workers, businesses, groups and individuals who had stepped up to help the Island through difficult times. The Chief Minister said the awards highlighted the pride the Island has in the many inspirational contributions and selfless acts across the community over the past two years.

A total of 16 awards were presented this year, recognising enterprises large and small, public sector bodies and services, business leaders, innovators, start-ups, the third sector, environmentalists, sector champions and those who contribute to the arts and culture. The Lifetime Achievement award was presented to Major Charles Wilson.

The evening was hosted by Trudi Williamson MBE, deputy chairman of Isle of Man Newspapers and Editor Richard Butt, with comedian Tim Vine and KPMG’s Micky Swindale compering the evening.