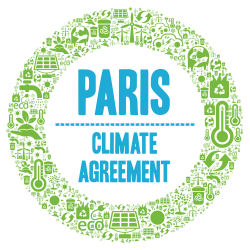 A landmark agreement, which underpins the United Nation’s crucial COP26 climate talks in Glasgow, will be extended to the Isle of Man after successful talks with the UK.

The Paris Agreement united almost all the world's nations – for the first time - in a single commitment to combat climate change, when nearly 200 countries signed up in 2015.

Members agreed to "pursue efforts" to limit global temperature rises to 1.5C, and limit greenhouse gas emissions from human activity to the same levels that trees, soil and oceans can absorb naturally - known as net zero.

The approval of the Isle of Man’s request, and those from the other Crown Dependencies, was announced by Greg Hands MP, the UK Minister for Business, Energy & Industrial Strategy (BEIS), at COP26 on Thursday.

The Minister’s announcement followed lengthy negotiations between the Isle of Man and UK Governments and a full review of the Island’s plans to reach net zero by 2050 - a goal also pledged by the UK and many developed nations.

This review confirmed that the Island will be able to comply with the obligations of the treaty and the UK’s overall target to reduce greenhouse gas emissions.

As part of the Island’s commitment a Climate Change Bill was delivered which could receive royal assent later this month. This work, and the ongoing research and development of the Climate Change Transformation Programme, has contributed to the successful application.

Daphne Caine MHK, Chair of the Climate Change Transformation Board, who is representing the Island at COP26 this week, said: “This hugely significant agreement brings nearly 200 countries together through a common cause; to undertake the urgent action needed to combat climate change. This extension clearly demonstrates the Isle of Man’s commitment to play its part on the world stage and build on the hard work that is already underway.”

A spokesperson for (BEIS), said: "The formal process for finalising the treaty extension will be completed after COP26, and will bring the Crown Dependencies into scope of the UK’s Nationally Determined Contribution (NDC) target to reduce emissions by at least 68% by 2030 on 1990 levels.”

Some of the key discussions at COP26 will be about whether countries are doing what they promised in the Paris Agreement.