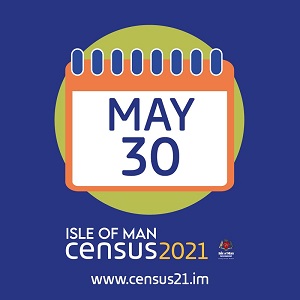 Census night will take place on Sunday 30 May.

Letters are being sent out this week to every household in the Island ahead of the process, which is held every 10 years.

Since then, it’s taken place every 10 years and has helped supply information and data to enable the Isle of Man Government to plan services, shape policies and observe societal trends.

The first interim census was held in 1966, with a population of 49,312, and is run five years after each full census.

A major change with this year’s census is that people are being strongly encouraged to complete the process online rather than using paper forms.

Letters being sent out this week will include a 10-digit access code to be used when filling in the online form.

The online form will then guide users through the process to ensure households only answer the questions that apply to them.

Respondents will notice that the online form is available when the letters first arrive and can be completed then.

‘The census is an incredibly important public tool, providing a clear picture of where people live and work, and helping Government to plan services in particular areas.

‘Its value has been proven time and again since the first census was held exactly 200 years ago, and I encourage everyone to engage with the process and help provide an accurate snapshot in time.’

Alternative options on how to complete the form are available to those who need it - by phone, in person at the census office or using paper forms.

Anyone requiring assistance should contact the census team by calling +44 1624 685700 or emailing census@gov.im, and the Census Office, at Nivison House (formerly the Job Centre) on Prospect Hill, Douglas, will be open from 8am to 4.30pm Monday to Friday, from Monday 24 May.

All households have a legal obligation to complete the census. Those which don’t face prosecution for failing to provide the requested information.

Why is the census important and what is it used for?