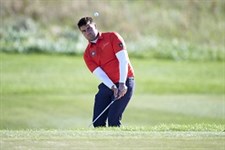 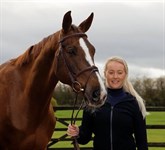 Golfer Tom Gandy and equestrian star Yasmin Ingham have been crowned Isle of Man sportsman and sportswoman of the year for 2020.

Both were recognised at the Isle of Man Sports Awards, sponsored by Microgaming Play It Forward, held in front of fans at the Villa Marina on Wednesday.

Tom, 29, enjoyed his best ever year on the PGA European Pro Golf Tour and recorded a string career best performances. He said:

‘We are such a strong sporting nation and I’m both proud and honoured to receive this award.’

Yasmin was named sportswoman of the year for a second year in a row after claiming her fifth British eventing title and consideration for a place at the Tokyo Olympics.

‘I’m absolutely honoured to win and it tops off an amazing year in which I won my first senior British championship and made the GB longlist for Tokyo. My main focus now is towards competing at the Paris Olympic Games in 2024.’

In total 11 awards were handed out on the night and there was a guest appearance from former cycling star and Olympic gold medallist Peter Kennaugh.

Christian Varley who ran 19 marathons in as many days was named Isle of Man Sports Ambassador before scooping the new Leonie Cooil Courage & Inspiration Award. His heroic efforts in 2020 raised more than £80,000 for people affected by the pandemic.

Judi Clark-Wilson, who dedicated more than 30 years to Isle of Man netball before she sadly passed away last year was recognised with a lifetime achievement award. She foundered the Manx Netball Association in 1982 before helping to drive the sport on the Island.

Weightlifter Kim Dean, who won a gold medal at the Para World Cup in 2020 was named Disability Sportsperson of the Year before athletes were presented with their Isle of Man Sports Aid awards for 2021/22.

The other awards went to:

‘After a particularly difficult year we were delighted to see how much our sportsmen and women, together with all those who support them, have achieved. Yet again, we are amazed and incredibly proud of them.’

‘Congratulations to all the winners and nominees. Last year was a challenge for everyone, yet our Island’s athletes adapted brilliantly. These awards are a celebration of their remarkable dedication and drive as they continue towards their individual and collective goals.’

‘After last year’s event was held online due to the pandemic it was fantastic to welcome back sports fans to the Villa Marina and celebrate the achievements of our leading stars and the people that support them to fulfil their potential.’