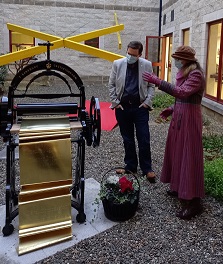 Minister for Health and Social Care, Lawrie Hooper MHK unveiled a memorial to Nelly Brennan in a courtyard at Noble’s Hospital, Douglas.

It had been intended to unveil the beautiful sculpture during the Year of the Nurse and Midwife celebrations in 2020 but due to the pandemic it was delayed.

The artwork is called ‘Cleanliness is next to Godliness’ which is as relevant today as it was during Nelly’s lifetime in the late 1700s-mid 1800s.

Local artist, Niamh Kelly designed the sculpture which comprises an old-style mangle draped in copper sheeting etched with Nelly’s name and words describing her caring nature.  An iron basket, filled with flowers, completes the display which was constructed by Island Iron Craft.

Douglas-born Nelly was a washerwoman who came to prominence during the deadly cholera epidemic of 1832-33 and is remembered for devoting her time to caring for those who had contracted the disease. While others shunned the sick, Nelly visited them in their homes to ensure they were washed and fed without any thought of her own personal health.

In recognition of her work, she was appointed as the first Matron of the Douglas Hospital and Dispensary when it opened in 1850 and went on to become a popular public figure, admired for her Christianity and philanthropy.

Although the mangle featured was not the type used by Nelly, the artwork is symbolic of her humble start in life and her industriousness. The project was generously funded by Culture Vannin who appreciated the need to memorialise the local heroine. Artist Niamh worked collaboratively with the team at Island Iron Craft. Accompanying signage containing Nelly’s biography is on display in the hospital corridor.

The need for a memorial for Nelly was supported by students from Year 8 at Ballakermeen School after learning of her great work as part of a local history project last year.  It is hoped that the students will pay a visit to the sculpture in the New Year.

“It is fitting at the time to remember a Manx lady, who demonstrated great compassion and placed the needs of others before herself, particularly as Manx Care staff continue to be critical in the care of our population today.”

“I thoroughly enjoyed bringing Nelly’s story to life – she was known as the Manx washerwoman so I felt a mangle and how important cleanliness’ was then and is today is a testament to such an influential woman on the Island who became known as the Manx Florence Nightingale.”