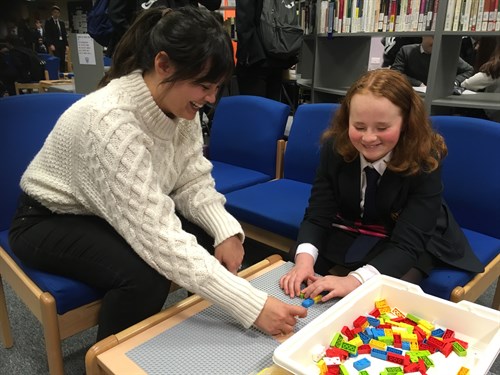 An Isle of Man school is amongst the first in the British Isles to use a system designed by Lego as a new method of teaching pupils who have a visual impairment.

It has now been made available to select schools and services that cater for blind or visually impaired students in those countries, with Ballakermeen High School amongst the first to try it out.

The bricks look like normal Lego, but unlike regular pieces, the studs are arranged into the system of raised dots that enable blind people to read.

Evie Roberts, 11, who was born blind and joined the school in September, said:

‘They’re really cool. It feels like a really creative way of working on ideas and I love the feel of them. It feels like more fun than using the standard Braille that I use most of the time.’

‘We are delighted to be amongst the first schools in the world to use Lego’s wonderful system. It means blind and visually impaired pupils can learn while engaging with classmates in a fun and creative way.’

According to the Lego Foundation’s Senior Play & Health Specialist, Stine Storm, the system that includes ideas for brick-based activities, has received overwhelming support from pupils, parents and teachers.

Mr Storm, said: ‘The possibilities for learning through play are endless and we look forward to witnessing how this can inspire children in their journey to learn Braille.’

‘The most impactful and long-lasting learning occurs when children are engaged in activities they enjoy and Evie has given it a glowing review. As well as students at Ballakermeen, the kits will be used to introduce other young children to Braille on the Island and I’m confident it will be a fantastic resource to help with reading and writing.’

The Vision Support team is receiving training by LEGO and The Royal National Institute of Blind People (RNIB), to help deliver learning through focussed activities and on key aspects of learning and development including exploration, orientation, literacy, numeracy and social skills.

‘The Lego Foundation has created an exciting and engaging way for blind and visually impaired children to learn critical thinking, problem solving and collaboration through play.

‘Braille is an important tool and these cleverly designed bricks mean visually impaired and sighted classmates can learn together in a fun and inclusive way.’

Braille takes its name from Louis Braille, the French educator who devised the system of reading and writing for people who are blind or visually impaired.