An area of former mining land in the south of the Island will be closed to the public from Monday 9 March.

The Isle of Man Government is restricting all access to its land at Cross Vein in Foxdale, due to concerns caused by historic waste material from the former mine, known as Snuff the Wind.

The action was recommended after a project to remove silt from Peel Bay Marina found a significant proportion of contaminants were linked with historic metal mining.

Despite not being an active mine for nearly 140 years, contaminated spoil heaps surrounding the engine house still contain heavy metals including lead and zinc.

The decision to restrict access to people and vehicles will limit the amount of contaminated material being disturbed, entering rivers, and ending up in Peel Bay Marina, where dredging and disposal continues to be a significant financial and environmental issue.

Stopping vehicles from driving on the mine spoil will prevent unnecessary erosion, and over time allow nature to remediate the ground surface. This may be slow to develop, but the churning effect from tyres currently makes it almost impossible.

If the ground is undisturbed, metals in the surface sediment will reduce as they leach deeper into the soil, allowing a fine crust of lichen and moss to take hold. That growth in turn creates a rich soil on which other plants can flourish and help bind it preventing contaminated sediment washing into rivers.

Unauthorised use of the Government owned land is illegal.

‘The decision is backed up by scientific analysis and absolutely makes sense from an environmental, health and marina perspective.

‘This is just one of a multitude of actions we will need to take to make silt less problematic to dispose of and improve freshwater habitats.  The health of those using the area must also be protected. Motorcycles churning up fine dust is dangerous to the riders’ health and has damaging ecological effects.’

As part of the Peel Bay Marina Project an assessment of the river Neb is underway to better understand how and where contaminants enter the watercourse.

Other action being taken by the Isle of Man Government will include work to reduce the erosion of river banks and the adoption of new forestry standards to further reduce silt entering the catchment whilst improving freshwater and riverbank habitats. 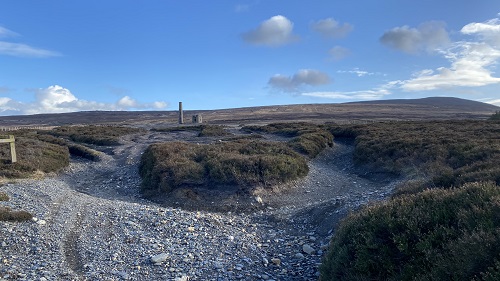