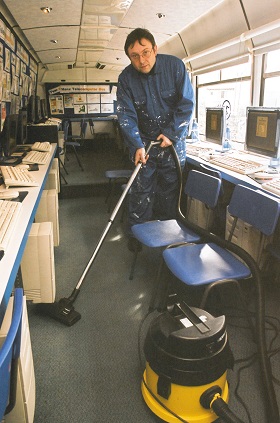 A teacher, who was once recognised by Apple for his unique Isle of Man computer bus service, is to retire next month - seeing an end to longest project of its type in the world.

Alex Townsend, known as the computer bus man, was teaching at St. Ninian’s secondary school in the 1990s when he came up with the idea of converting a decommissioned Leyland bus into a mobile classroom to teach children about the internet.

The bus was originally bought by the Department of Education for £5,000 before it was transformed with the backing of the Isle of Man Government, Manx Telecom and Isle of Man Transport.

On its launch in 1998, the project was hailed as a state-of-the-art travelling computer centre to take computer education into the 21st century in local press, but many doubters thought his idea wouldn’t catch on. Twenty-two years later Alex estimates that more than 100,000 children have used the service.

‘Some critics thought it would only last a few weeks but we’ve been inspiring children for 22 years. Back then few people had any idea what the internet was and the early weeks were spent explaining what www dot meant.’

In 2014, Alex was recognised by the American tech giant Apple, when he was named on their list of pioneers who had made a profound impact with their computers. The list was issued to celebrate the 30th anniversary of the first Mac computer and included renowned architect Jürgen Mayer H, musician Moby and Nike designer Tinker Hatfield.

An Apple spokesman described his computer bus as a 'stroke of brilliance.'

‘I’ve loved visiting the Island's primary schools all these years and seeing the excitement and curiosity. I drive the bus, vacuum it, paint it, blow the tyres up, put diesel in and teach the lessons, so I think my nickname computer bus man is pretty accurate.’

‘Alex has inspired several generations of Manx children and is without question an innovator.

‘In his 38 years as a teacher he had made a real difference and sparked the imagination of thousands of children.’

Sam Palmer, who used the service was inspired to become a teacher himself at Victoria Road School.

‘The thought of it being the end of the computer bus, a resource that I distinctly remember engaging with is very sad. I put my passion and excitement of the teaching of ICT and the enhancement of learning through technology down to the work Alex has done and the bus itself.’

Marg McGee from Manx Telecom, the long-term sponsor of the Computer Bus, said:

‘Alex has been pivotal in the success of the vehicle and bringing state-of-the-art technology within the reach of all Manx students.

‘Alex was a driving force in establishing the Computer Bus as well as being the actual driver. We’ve worked together from the very beginning, when Manx Telecom gave an initial grant to convert the bus, and Alex has always been so passionate about what he created. He was always keen to pursue new technology such as having the bus 4G-enabled in 2015 and his recognition by Apple was justly deserved.

‘Since the launch of the bus in 1998, thousands of Manx students have benefitted from his unwavering and enthusiastic commitment to improving ICT skills using the latest equipment and software.  Some of these students are now working with us at Manx Telecom and remember their lessons on the bus as a highlight in their education.

‘Alex really made the Computer Bus a fun and inspirational place to be and we’d like to thank him for all he has accomplished with it.’

The bus was unplugged for the final time at a special event at Sulby School attended by many people who have used the service since 1998. 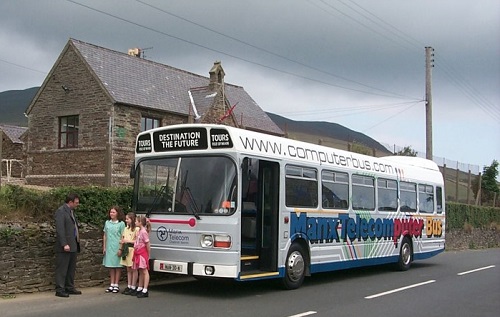 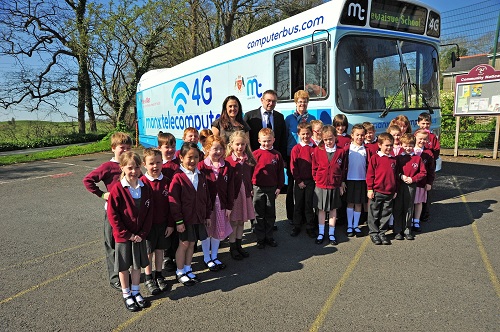