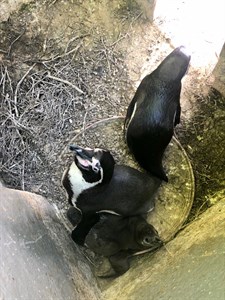 Ten rare penguin chicks have been born at the Curraghs Wildlife Park on the Isle of Man.

The Humboldt penguins are part of an internationally recognised breeding program – run by the European Association of Zoos and Aquaria – and classed as vulnerable by the International Union for the Conservation of Nature.

‘It’s a major success story for our breeding program and our team who have worked so hard throughout lockdown. The Penguin colony had not bred in years then we had a chick in 2018, four last year and 10 this time.’

The chicks are being reared by their parents in special nesting boxes before they are large enough to venture out into the main enclosure and meet visitors now that the Park has reopened.

Their keeper Bernie Cannan, who has been instrumental in the recent success, said:

‘It’s been a phenomenal year. I feed the parents five times a day and they then feed their own chick who they will watch for the first few months. It is a very special time.’

The Park is also raising funds to boost Humboldt penguins in the wild. This year it will attempt to raise £2,000, through its Conservation fund, for the charity Sphenisco. The charity provides education for fishermen and school children in South America and works to secure the important habitat where the penguins breed.

Geoffrey Boot MHK, Minister for the Department of Environment, Food and Agriculture, who manage the Park, said:

‘Not only does our Wildlife Park protect species on site but its fundraising efforts deliver direct help in the wild – where it is most needed.’