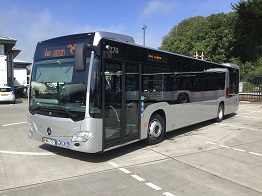 A total of 16 new buses recently arrived as part of the Isle of Man Government’s scheduled replacement programme, including the Island’s first hybrid vehicles.

The ongoing modernisation of the fleet is designed to significantly improve vehicle emissions, as well as enable used vehicles to be sold on while they are still in good condition.

Six Mercedes Citaro single deck low emission hybrid vehicles have been acquired with the aim of increasing sustainable forms of public transport, and in support of the Isle of Man Government’s commitment to achieving net zero carbon emissions by 2050.

The arrival of 10 double deck StreetDecks will see them replace 10 Volvo vehicles, stepping up emissions standards from Euro 5 to Euro 6.

All vehicles come fitted with WiFi and USB charging points.

The total investment was included in this year’s Budget as part of the rolling capital replacement programme and is around £3.7m.