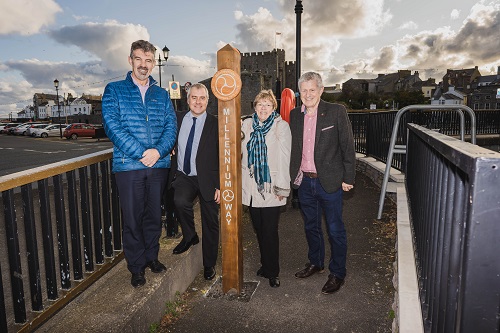 Following the way of past Manx Kings, the Millennium Way starts at Sky Hill, Ramsey, travelling 28.5 miles through the Isle of Man, ending at Castletown Harbour.

The new plaques, made by the Isle of Man Sawmill, have been installed at both the start and end of the popular Island walking route.

‘As the first entire Nation to be a member of the UNESCO world network of Biosphere Reserves, the Isle of Man is a truly unique place to live, work and visit. We are incredibly lucky to have some of the finest walking routes in the British Isles which offer breath-taking views of our beautiful landscapes as well as providing the perfect environment to switch off whilst getting active. Celebrating the 40th anniversary of the Millennium Way allows us to reflect upon our unique heritage and culture which led to us being awarded this prestige accolade.

‘The Island’s walking product is a key pillar of Visit Isle of Man’s strategy for developing visitor growth as we look to promote our extraordinary natural environment and the adventure playground on our doorstep. The ongoing commitment to develop the Millennium Way and other key routes such as the Raad ny Foillan is a vital part of this and we welcome the opportunity to work with the Department of Infrastructure to fulfil this development.’

‘We have been working closely with Visit Isle of Man to enhance the overall walking experience and ensure this matches expectations for both visitors and residents alike. Considerable work has been carried out by Highways Services teams to replace all the waymarker signage and improve the boardwalks and paths along the Millennium Way.

‘The 40th anniversary is a fitting time to celebrate this iconic route and remind Islanders, particularly, of its important cultural significance. We often overlook features which are on our own doorstep and I’d encourage more to get out and enjoy the Millennium Way as well as the many routes which make up our footpath network.’

As part of the anniversary celebrations, Visit Isle of Man, an executive agency within the Department for Enterprise, has updated their Millennium Way Geotrail Passport, a fun and free initiative using Global Positioning System (GPS) to guide walkers along the route in search of 46 hidden geocaches. The ‘passport’ now provides walkers with the names and locations of each cache along with additional helpful details for each geocache such as the surrounding terrain ratings, nearest public transport links and car parks.