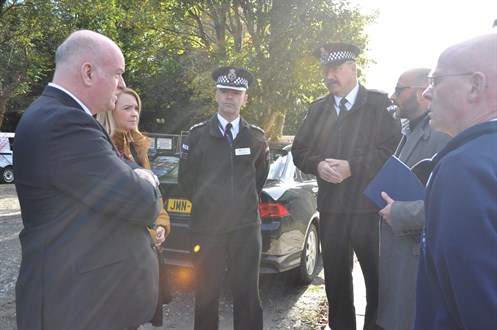 The Chief Minister is driving action across government to help residents in Laxey affected by this week’s floods, and ensure the risk of flooding as a result of similar severe weather in future, is reduced.

Chief Minister Howard Quayle called an urgent meeting of ministers and senior officers after spending several hours seeing for himself the damage caused by flooding to homes in Glen Road after torrential rain in the Laxey valley on Tuesday night and Wednesday morning.

Mr Quayle called for updated reports on the events which led to the Laxey river overflowing, sending a deluge of water into properties on Glen Road, leaving many in need of extensive repair and refurbishment.

‘I was extremely concerned to see the havoc this flooding caused. It must have been deeply distressing for the residents, whose lives were turned upside down in the space of a few hours. It was important I visited Laxey to see the situation for myself, to meet those affected and most of all, to listen to their concerns. I fully understand the sense of frustration in the community about whether enough has been done to prevent the river bursting its bank in heavy rains, as this is not the first time that properties along the Laxey river have been flooded.

‘What matters now is putting things right - helping people clear up and start afresh, while making concerted efforts to prevent flooding in similar circumstances. I intend to steer government action to improve the situation - whether that means practical effort on the ground in the short term, or new policies and projects to prevent this type of disaster in the longer term.’

‘A wide range of measures is open to us and all options are being considered.  Some can be achieved quickly. Others will take time and money. I’ve asked ministers and officers to come back to me within the week with firm plans for positive action.’

The river has been cleared of fallen trees and branches, as well as rocks and gravel churned up or swept into the river during the flood. A concrete structure on top of the old MER weir has been removed as it acted as a trap for debris, creating a major obstruction in the river. A forestry team is checking streams and tributaries in the surrounding area, and has been clearing debris through Laxey Glen.

Fire and Rescue Service officers and Civil Defence volunteers have been embedded in the community in the past few days and continue to help householders salvage possessions, remove damaged furniture from their houses, and load skips. They’re also checking on the welfare of residents around the village and assisting as required.

The Chief Minister has asked Treasury to ensure that appropriate funding is made available if needed to support agencies on the ground.

Breaches in the river wall have been shored-up with temporary barriers, and extra sandbags have been made available to residents. A community liaison officer is being appointed to visit affected residents, offer reassurance and act as a point of contact with government, as well as sign-posting people to other agencies for help.

Looking to the longer term, solutions to deal with heavy rainfall by adding permanent new infrastructure in the village will be examined and all practical ideas shared with local people to ensure they are happy with any structural changes that might be made. Works in Laxey harbour and plans for a sea wall will be reviewed when the full impact of the flood is known. New walls containing drainage slots installed near Laxey bridge worked well and the system could be extended.