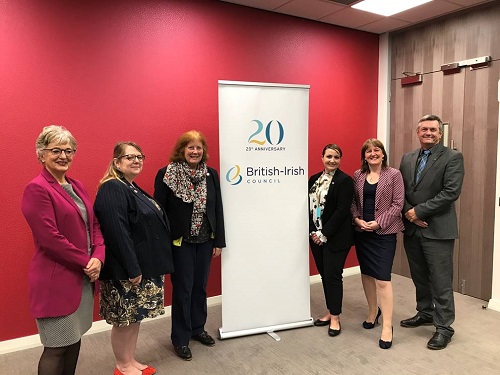 The British-Irish Council held an Early Years Policy Ministerial meeting today, hosted in Tŷ Hywel, Cardiff by the Welsh Government. Ministers approved the Forward Work Plan of the sector. The meeting was chaired by Julie Morgan AM, Deputy Minister for Health & Social Services in the Welsh Government.

Deputy Minister Morgan welcomed Ministers and Officials from across the eight Member Administrations of BIC to Cardiff, emphasising the critical importance of successful early years policy to providing children with the best start in life.

The BIC Ministers discussed and reviewed the work sector report, ‘Early Years – Sharing Policy and Practice Across the Administrations of the British-Irish Council’, which outlined the breadth of the official engagement undertaken over recent years, and demonstrated the significant benefit gained by Members Administrations from collective participation in the BIC Early Years Policy work sector. Ministers agreed that the report should be made available on the BIC website for the benefit of interested stakeholders.

BIC Ministers also discussed the Future Work Programme of the work sector. Ministers acknowledged the challenges for the sector in the coming years and agreed that the focus should be on four main themes:

Ministers thanked the work sector officials in each of the Administrations for their active engagement in the preparation of the report and the briefing and looked forward to receiving regular updates on the progress. The Ministers endorsed the Forward Work Plan for the BIC Early Years Policy work sector and Deputy Minister Morgan closed the meeting, thanking all participants for their contributions to the discussion.