Gov.im uses cookies to make the site simpler. Find out more about cookies
Skip to content
The British-Irish Council Indigenous, Minority and Lesser-Used (IML) Languages work sector held its fifth Ministerial meeting today, hosted by the Isle of Man Government. Ministers were welcomed by Graham Cregeen MHK, Minister for Education, Sport and Culture on behalf of the Isle of Man Government. 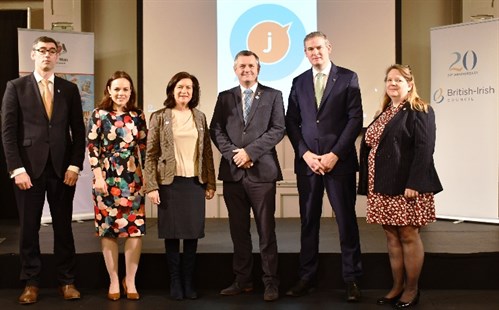 Ministers discussed the report arising from the conference 'Adult Learning of IML languages" which took place on 8/9 March 2018 in Belfast. The focus was primarily on adult learning of IML languages and links with community, workplace and wider society which straddled the three topics of the work sector. In particular, speakers addressed issues such as language learning outside of traditional classroom settings and the role of language in building community cohesion. Approximately 75 delegates and speakers from across the eight BIC Member Administrations attended the event, representing a cross section of the public and community sectors as well as academia.
Ministers noted the report of the conference and agreed to make the report available for public reference. The report of the conference can be viewed in the reports section on the British-Irish Council website: www.britishirishcouncil.org.

Ministers also received a presentation from Phil Gawne on behalf of Jeebin, the Manx Language Network. The presentation outlined the history of the Manx language and celebrated the work of those involved in its remarkable resurgence.

The United Nations declared 2019 The Year of Indigenous Languages (IY2019) "in order to raise awareness of our languages, not only to benefit the people who speak these languages, but also for others to appreciate the important contribution they make to our world's rich cultural diversity". It was noted that an important part of the IML work sector's remit is to share best practice, to learn from one another and to celebrate the varied and diverse languages used on these islands. Ministers highlighted a number of activities that have been undertaken by the Member Administrations to partake in this initiative and it has served as a good foundation for more progress on supporting IML languages in the future.