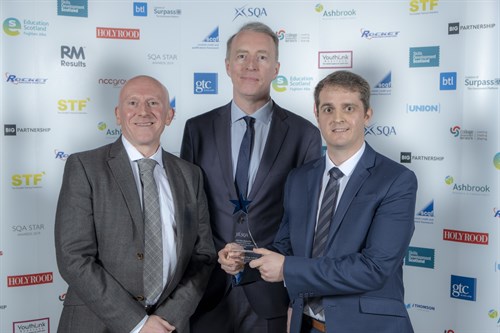 An Isle of Man school has won a prestigious award for its pioneering approach to the qualifications it offers students.

Castle Rushen High School was named the ‘International Centre of the Year’ at the high-profile Scottish Qualification Authority (SQA) Star Awards ceremony in Glasgow on Friday.

The annual event celebrates outstanding achievements in education and training, not just in Scotland, but throughout the UK and around the world.

The southern school was nominated for taking a pioneering approach to education, by offering students SQA qualifications to complement traditional GCSE Design and Technology options in areas such as practical cookery and engineering. The school is now progressing a ‘Bike Academy’ as they look to introduce further SQA qualifications.

Graham Cregeen MHK, Minister for Education, Sport and Culture congratulated the school and staff for winning the prestigious award.

‘We have an education system which continues to evolve to support the needs and develop the interests of learners as well as linking directly with potential employment opportunities. This award is recognition of the efforts made by the school in developing the Design and Technology curriculum. It is a significant achievement by Castle Rushen High School and contributes to priorities outlined in Programme for Government.’

Castle Rushen High School Head Teacher, Keith Winstanley, reported that SQA options have resulted in a ‘sharp increase in pupil engagement’.  He said the school took the decision to include these qualifications in their options for 14 to 16 year old pupils after the Head of Design and Technologies, Richard Maltby, was inspired by visiting Scottish schools.  This was part of an opportunity arranged by School Improvement Adviser, Jan Gimbert.

‘The awards will shine a light on inspirational projects taking place in our centres – the schools, colleges, training providers, and employers who deliver our qualifications truly remarkable achievements in education.’

The ceremony held at Kelvingrove Art Gallery and Museum in Glasgow acknowledges the innovation, partnerships and creativity from schools, colleges, employers and training providers delivering the qualifications.