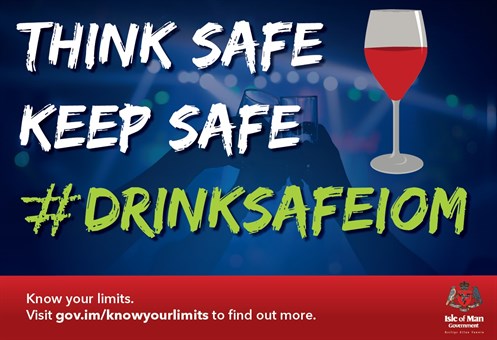 The Manx public are encouraged to enjoy themselves safely and responsibly this festive season in a campaign which sees a fifth year of a collaboration between Public Health, Isle of Man Constabulary and Bus Vannin.

TravelSafe & KeepSafe are the headline slogans for the 2019/20 campaign, which urges party-goers to think ahead, plan their nights out, drink sensibly and arrange to get home safely.

This year, timetables and information on late night bus services will be available from all licensed premises around the Island, and there’ll be reminders to book taxis in advance on busy nights.

Ellan Vannin Fuels, Isle of Man Newspapers and the Manx taxi trade are on board as campaign partners this year, helping to support promotional messaging on sites ranging from bus backs to billboards.

Officers from the Roads Policing Unit will aim, as in previous years, to reduce levels of alcohol-related offending - including drink-driving. The Constabulary will use its popular social media channels to outline the stark consequences for offenders as well as the impact of crime on victims; meanwhile Public Health will focus on the health and social implications of alcohol misuse.

Police patrol units will be out on the roads throughout the festive season. Officers from the Road Safety Team will be in Douglas town centre for the Christmas lights switch-on and the start of late night shopping on Thursday 21 November. They’ll be giving out timetables and advice to the public and reminding motorists they can still be over the drink-drive limit the morning after a night out.

‘We don’t want to see anyone’s Christmas ruined as a result of alcohol misuse this festive season.

‘In particular we’re calling on the public to think and plan their transport before their celebrations and to remember when it comes to driving, any amount of alcohol can cause impairment and increase your chance of being involved in a collision. You must also consider whether you may still be affected by alcohol the next morning. Please make use of the public transport, taxis or have a designated driver if you are out enjoying the festivities.’

Earlier this year, the Public Health Directorate analysed the effectiveness of the 2018/19 safety campaign, and used some of its findings to shape this year’s approach.

‘It’s essential we evaluate public campaigns such as this to see whether our messages are hitting the target. We made progress last year, particularly in encouraging use of the Night Owl late buses, which rose by 40% on the previous year, a significant behaviour change. But the buses don’t go everywhere, and I’m delighted we have a representative of the taxi drivers’ union on our steering group this year, as the trade plays a vital role in helping people get home safely.

‘There is still work to do to deter people from driving after consuming alcohol and reducing the number of alcohol-related visits to the Emergency Department at Noble’s. We hope for positive change in these areas this year, although the message is essentially the same: enjoy the party season responsibly – or risk the consequences.’

To coincide with the campaign, Bus Vannin has scheduled additional Night Owl services leaving at a later time than usual – running at weekends and on New Year’s Eve to assist party-goers in getting home safely. Timetables can be downloaded from bus.im.