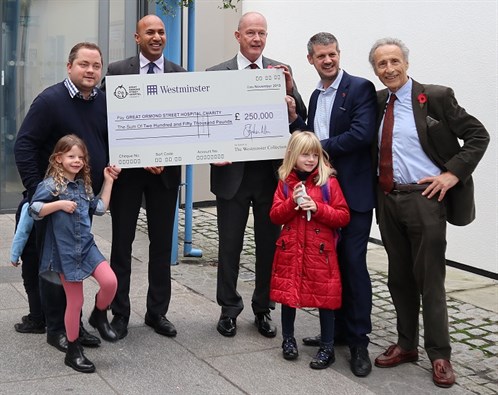 The coins came into general circulation on the Isle of Man in early July, with a proportion of the value of each coin sold being donated to GOSH.

They were launched by patient Olivia Dawson, who has a rare genetic disorder called Williams Syndrome, and Treasury Member Ralph Peake MHK in June to mark the 90th anniversary of JM Barrie gifting the rights to his much-loved story to GOSH.

‘It’s been a privilege to present this cheque today and pay tribute to the magnificent work which takes place here at Great Ormond Street Hospital.

‘The story of Peter Pan is an enduring classic, remaining popular across the generations, and it was regarded as an honour when the Isle of Man was asked to be the country of issue for these exceptional coins.’

Available to buy from Manx National Heritage, Tynwald Library, the Isle of Man Post Office and other local retailers, the collection is made up of six coins, each featuring a well-known character and quote from the book. They were minted in various metals by Tower Mint, and sets are also available in colour from www.westminstercollection.com