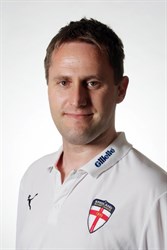 Best-selling author and Professor of Psychology, Damian Hughes will deliver the 7th Isle of Man Sport Lecture at the Villa Marina at 7.00pm on Tuesday 14 May.

Professor Damian Hughes is a renowned international speaker who combines his practical and academic background within sport, organisational development and change psychology to help organisations and teams create a high performing culture.

'Having Damian here for this year's event is a real coup for sporting and business communities in the Isle of Man. The Island has a microcosm of successful cultures and punches above its weight in performance sport. The Isle of Man Sport Lecture is a great opportunity for these communities to gain a greater insight.

'As outlined in the Island's Sports Strategy we're always looking for opportunities to improve and develop coaching on the Island. Comparing Damian's examples of successful cultures with our own will be a real eye opener and will help highlight reasons why we do so well, but also draw attention to areas where we can be even better.'

'The Island has a fantastic sporting heritage and I am very excited about the chance to come and meet many of the people who have helped create such success.'

Appointed as a Professor of Organisational Psychology and Change for Manchester Metropolitan University in September 2010, Damian currently serves as a member of the coaching team for Scotland Rugby Union and Canberra Raiders. His innovative and exciting approach has been praised by Sir Richard Branson, Muhammad Ali, Sir Terry Leahy, Sir Roger Bannister, Tiger Woods, Jonny Wilkinson and Sir Alex Ferguson.

Tickets for the event are available from the Villa Gaiety website and are priced at just £2. Doors open at 6.30pm for a 7pm start.