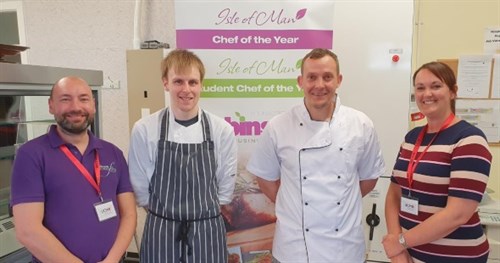 Island chefs are proving themselves in a competition highlighting the versatility of Manx food and drink.

Sponsored by Robinson’s, the Isle of Man Chef of the Year competition has been hotly contested for many years.

Five local chefs were shortlisted to compete in heats taking place in the kitchens at UCM as they competed for a place in the finals.

Vladimir Dvorak of Harbour Lights at the Sefton and Tyler Livesey of Jean-Pierre’s Bistro, were selected by the judges as finalists to compete for the Isle of Man Chef of the Year title at the Isle of Man Food & Drink Festival in the Villa Marina gardens on Saturday 14 and Sunday 15 September 2019.

At the heats, Vladimir prepared a dish titled As Manx as the Hills - a fillet of lamb with lamb jus, potato gnocchi and shepherd’s pie foie gras. Tyler’s dish was a pan roasted back saddle of Manx goat.

Chris Franklin, Deputy Manager of Hospitality and Catering at UCM, said he and his fellow judges - Janna Horsthius and Paul Caisley from Robinson’s and Lucy Verdon, Marketing Executive within the Department of Environment, Food and Agriculture (DEFA) - found it extremely difficult to select two finalists, such was the quality of entries.

‘We had a fantastic standard of entries this year,’ Chris said. ‘It’s great to see such talent and creativity amongst local chefs trying to push boundaries and celebrate the local produce available to them. Every chef prepared their dishes with skill and passion and should be incredibly proud.’

Via its Food Matters strategy, DEFA is growing the value of the Isle of Man’s food and drink sector.

‘The Island has a growing reputation for its high quality, distinctive food and drink, and as a result we are rapidly becoming a foodie destination.

‘Not only does eating Manx mean money goes back into the local economy and supports local jobs; it also guarantees a great-tasting meal and fewer food miles.

‘This competition is a showcase for the ever-growing range of quality local produce and a stage for our wonderfully talented chefs. Congratulations to all who took part.’

‘We are committed to supporting and promoting the excellence and diversity of Manx growers and producers, and supply many local chefs. It was amazing to see so much innovation and drive from all five chefs, all of whom I am sure will go very far.’

The Isle of Man Chef of the Year winner will be crowned at the Isle of Man Food & Drink Festival. There, the final will be judged by Minister Geoffrey Boot MHK, local chef Tony Quirk and Festival VIP Selasi Gbormittah, professional pastry chef and semi-finalist of The Great British Bake Off. The winner will receive a trophy and certificate, and have the opportunity to stage at a top London restaurant, co-ordinated by Colby-born Colin Clague, Executive Chef at Rüya Dubai.