The coins, which will come into general circulation on the Isle of Man in early July, mark the 90th anniversary of JM Barrie gifting the rights to his much-loved story to Great Ormond Street Hospital (GOSH).

The collection is made up of six coins, each featuring a well-known character and quote from the book. They have been minted in various metals by the Isle of Man Government’s currency partner, Tower Mint, and sets will also be available in colour.

Available to buy from the Isle of Man Post Office, the coins were launched by GOSH patient Olivia Dawson, the daughter of Tower Mint director Elliot Dawson, and Treasury Member Ralph Peake MHK in London on Saturday 8 June. Olivia has a rare genetic disorder called Williams Syndrome and has been under the care of the hospital since she was three years old. For each coin sold, a proportion of their value will be donated to GOSH.

'I was honoured that the Isle of Man was asked to be the country of issue for these coins. They mark the enduring nature of JM Barrie’s story as well as the amazing work that is carried out by Great Ormond Street Hospital every day.

'These are beautiful coins and I do hope that people will have the opportunity to pop by and view them and will be inspired by the quote and image when they are in general circulation.'

Precious metal and coloured coins are only available through The Westminster Collection website. 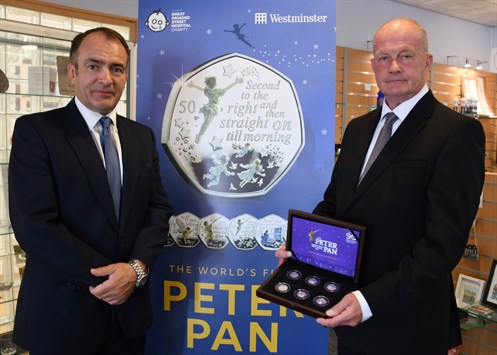