A scheme to make it easy to obtain drinking water when on the move is launched in the Isle of Man today.

Refill Isle of Man encourages shops, cafes, restaurants, tourist attractions and other publicly accessible premises to display an easy to recognise sticker, appear on an app and fill up people’s water bottles with cold tap water free on request.

It’s hoped the scheme will reduce the amount of plastic that damages the environment and, ultimately, the amount manufactured.

Refill is run by City to Sea, a not-for-profit organisation that campaigns to prevent marine plastic pollution.

The scheme is being launched locally by UNESCO Biosphere Isle of Man, with the support of Manx Utilities.

To sign up as Refill Stations, premises must have a cold water tap that isn’t in a toilet area or over an open drain.

Refill Stations display the campaign’s blue logo and appear on the Refill app, so people can spot or search for them while out and about.

‘The Island’s outstanding natural qualities were recognised by UNESCO when it awarded us Biosphere status in 2016.

‘UNESCO Biosphere Isle of Man is newly signed up to the World Network of Island and Coastal Biosphere Reserves – and is among Biospheres that have committed to play a leading role in that network’s endeavours to find shared solutions to the global problem of plastics.

‘As a Government, we are also formulating the second part of our Single Use Plastics Plan, to deter use of plastic across our community.

‘We need water to live and stay healthy. We lead busy lives, we exercise more and we get out and about and enjoy the countryside. So we carry water with us and consume it on move.

‘But we are all aware of how harmful to the environment plastic can be.

‘In manufacturing plastic in the first place, we are depleting our planet’s valuable natural resources.

‘And in continuing the culture of purchasing water in throwaway bottles, we risk careless disposal that blights our countryside and beaches and leads to the heart-breaking images we see of beautiful land and marine creatures that have died agonising deaths after ingesting plastic.

‘It’s time to turn the plastic water bottle from the fashion accessory it had become to something socially unacceptable when used once and thrown away.

‘Refill will make it easy to fill up with water on the move.

‘We hope premises will become Refill Stations – and that residents and visitors alike will visit these stations to fill up their own bottles with water when out and about.

‘I must praise the small number of local organisations who had already, independently, registered with Refill, as well as those who suggested we adopt and run an Island-wide scheme, among them local artist Jeni Wood.’

‘We are delighted to support the Refill Scheme as an environmentally sustainable way of supplying the excellent quality water we have in the Isle of Man to those on the move.’

‘We’re so excited that the Isle of Man is joining the Refill movement and making a real difference by reducing reliance on single-use plastics. Every time we refill a re-usable bottle we save our own money and the planet’s resources, and all those individual refills add up to a huge impact.’

‘Refill puts the power to stop plastic pollution in people's hands. It’s a fantastically easy way to reduce your plastic consumption and save money at the same time.’

Today’s launch took place at the Manx Wildlife Trust shop in Peel, which has become a Refill Station with the installation of a drinking water fountain.

Joining as Refill Stations this month are:

The Department of Environment, Food and Agriculture at Thie Slieau Whallian, St John’s, will also be a Refill Station, as will the Curraghs Wildlife Park (although standard admission charges apply). Manx Utilities’ headquarters at Isle of Man Business Park will also offer free refills.

Already signed up as Refill Stations were:

To search for Refill Stations on the Isle of Man, download the free Refill app. 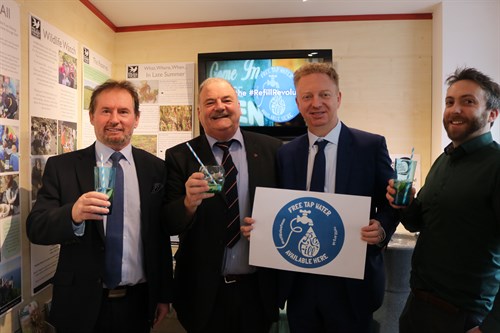