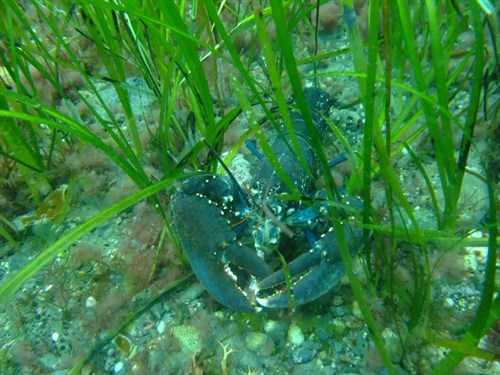 An underwater plant species which can store carbon 35 times faster than a tropical forest has ‘expanded significantly’ in Manx waters, since the creation of the island’s first marine nature reserve.

Eel grass, also known as sea grass, cleans the ocean by absorbing polluting nutrients, while also absorbing carbon dioxide and producing oxygen, and is found in four areas around the island’s coast including Ramsey Bay.

Since the 1930s, marine scientists estimate that eel grass meadows have declined by 90% in the North Atlantic; initially due to disease, but subsequently due to pollution, poorly-managed coastal development and other human activities. Globally, the various sea grass habitats have been declining at around 7% per year, so they have become an important focus for conservation.

In 2011, when Ramsey Bay was designated a MNR, the area set aside to protect eel grass was about 0.5 km2, in the south-west corner of the bay. The new survey found its coverage is now around 2 km2, and stretches from above Queen’s pier eastwards to beyond Stack Mooar .

DEFA’s Senior Marine Environment Officer, Dr Peter Duncan, said it acts as a nursery for a wide variety of marine life including fish, crabs and lobsters and that particularly dense areas were found around the end of Queen’s Pier and off Port e Vullen.

‘As well as these biological and fisheries services, eelgrass meadows are now being seen as important carbon sinks in the marine environment, storing carbon in the plant above and below the sediment, but also slowing the release of carbon trapped in the sediment. ‘Blue-carbon’, the carbon absorbed and stored in our marine habitats, will become increasingly important as we aim for a carbon-neutral island, so it’s vital that we understand and protect these areas’.

Eel grass is also found in Baie ny Carrickey, near Port St Mary, in Laxey Bay and in Langness Marine Nature Reserves where it grows in shallow waters on sandy seabeds, in which they form a root network, binding the seabed together and enabling the plants to form large underwater green meadows.

‘This is good news, as it shows that our marine nature reserves are successfully protecting important habitats and species, which in turn support a range of activities, including commercial fishing and recreation.

‘There is an exciting opportunity to help the spread of eel grass through our new Marine Nature Reserves, which could provide an important contribution to our natural carbon capture response to emissions reduction. This marine plant can absorb more carbon dioxide per year than many tree species and importantly starts absorbing large amounts quicker, whilst also providing resilience against coastal erosion.’

Building on the success, the Isle of Man is also assisting a UK-based restoration project by Swansea University, which aims to collect one million sea-grass seeds from around the British Isles, germinate them and restore some of Britain’s sea grass beds lost in the last century.

The Manx work is being undertaken by the volunteer organisation Isle of Man Seasearch under strict DEFA controls with divers harvesting seeds from Ramsey Bay before they are sent to Wales for germination.

It is hoped the collaboration will lead to seeds being collected and germinated on island and reintroduced in areas where the plant has disappeared completely, such as Port Erin Bay MNR.