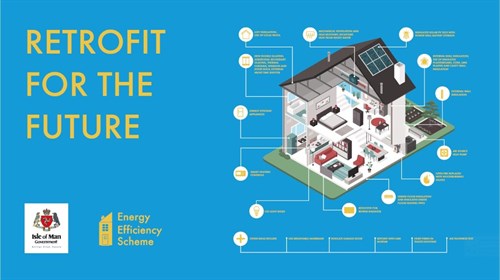 The Isle of Man Government would like to announce Deb Cripps as the winner of the Retrofit for the Future ideas competition which ran from May to mid-November. Manx residents with architectural backgrounds, studying architecture, building retrofitting expertise or those with a passion for green construction were asked to submit designs which could significantly improve the energy performance of an existing Manx home to make it a future-ready building.

At the awards ceremony on Monday 9 December Minister for Environment, Food and Agriculture, Geoffrey Boot MHK presented Deb Cripps with the main prize of £5,000 for her submission which included ideas and techniques for increasing the energy efficiency of a 1970s bungalow, a style of residential property which can be found in large numbers across the Island.

‘The challenge of significantly improving the energy efficiency of residential buildings is not to be underestimated. The long term goal is to have desirable, warm, affordable homes for life which contribute to meeting emissions targets and help form part of the Island’s response to climate change.’

‘We felt Deb Cripps's submission, in particular, was a great example of a practical, relatively low cost solution that could be used across a wide range of homes in the Island. We were impressed with the use of multiple techniques to increase energy efficiency of an existing Manx home that had also been put into practice, giving it an extra level of detail for real-world cost, savings and increase in efficiency.’

The judges were very impressed with the attention to detail across all the submissions and their relevance to many existing Manx properties.

Also announced were two runners up Richard Strivens and Summer Fearnley who were both awarded £1,000 for their submissions for energy efficiency upgrades to Victorian style houses and social housing.

‘I would like to thank everyone who took the time to submit their ideas and to congratulate Deb, Richard and Summer. The standard of submissions and amount of research shown throughout was high and ranged from new techniques that utilise waste products and use of smart technology to education and community projects.

‘It is estimated that 80% of the Isle of Man homes that will be in use in 2050 have already been built, therefore ideas generated by this competition can go a long way to help form the Island’s approach to retrofitting properties to meet future ambitious emission targets.’