Staff at Noble's Hospital have demonstrated their ability to respond to a major incident in the Island after being put through their paces in Exercise Apollo.

The annual training day is designed to stress-test procedures in place across the hospital in the event it has to deal with an influx of casualties following a large-scale emergency.

All sectors of the hospital were represented and participants included doctors in a variety of specialities, nurses, theatre and intensive care specialists along with laboratory, diagnostic and mortuary staff. The essential role of porters, catering, housekeeping, reception and admin staff were added to the exercise, alongside a virtual media centre and reception for relatives.

Exercise Apollo simulated Noble's response to the arrival of scores of casualties following an imagined aircraft accident at Isle of Man Airport. Earlier in the day, emergency services practiced their response to the scenario which involved a plane carrying 220 passengers and crew.

The hospital's Emergo emergency planning kit was deployed for the second time. Its detailed components provide miniature virtual patients, allowing planners to allocate injuries and immediate needs to reflect likely casualties. These were dealt with by staff who liaised with other teams to organise their treatment and care, putting the whole system under pressure. The Emergo kit includes pieces representing medical equipment and facilities, with the whole exercise taking into account the hospital's actual bed status and staffing on the day.

As a major incident was declared, teams responded in accordance with the unique action cards written for their areas, and afterwards at a 'hot' debrief, gave feedback on how the system had worked in practice, and whether any tweaks were needed.

Keyll Darree education centre hosted the event with each hospital team allocated a room as their work area. Teams collaborated on how to deal with incoming patients, making rapid decisions on how to deploy staff and facilities, illustrating their response on large whiteboards. Meanwhile senior clinical staff, emergency service officers and hospital managers oversaw the operation from a control room. This year the casualty bureau was tested with senior members of Isle of Man Constabulary also taking part in the exercise.

'Major incident planning days are hugely important to ensure our readiness to deal with incidents which would stretch us to the limit. The Island feels very safe, but we must not lose sight of the possibility we could be faced with a serious emergency at any time. We have robust plans in place, but it's essential we test them on a regular basis and make any adaptations needed. We broke new ground this time in testing how community mental health services would respond to such an incident, both on the day and in the aftermath, adding an important new dimension to our planning model.

'Staff gave their all to the challenge, which included some unexpected 'injects', such as breakdowns and shortages – thrown in to make the exercise more difficult still, and to encourage teams to think their way through problems. I was extremely impressed at the commitment, professionalism and capability displayed by so many busy people. I am confident we are in good shape to provide safe, effective and compassionate care to patients and their relatives at a distressing time, should the unexpected happen.' 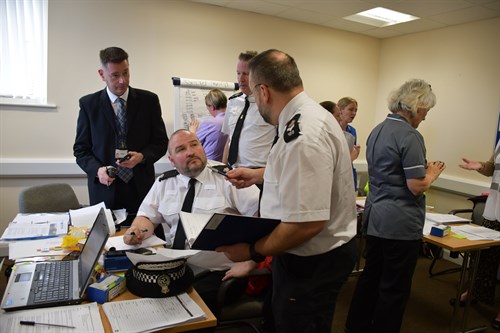