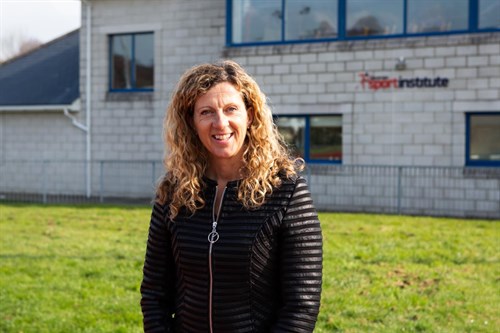 Local sporting heroes were celebrated at the Isle of Man Sports Awards, held at the Villa Marina this evening.

The event, which is sponsored for the second year by Microgaming PlayItForward, saw the Island’s community come together to honour the outstanding sporting achievements of 2018.

Guest of honour at this year’s ceremony was 1992 Olympic gold medal winner and former British track and field runner, Sally Gunnell OBE, who stepped up to the event in place of Greg Rutherford MBE, who was unable to attend.

The 2018 Sportsman of the Year award was won by double trap shooter, Tim Kneale, who brought home a silver medal at last year’s Commonwealth Games.

Isle of Man and British Swimmer, Charlotte Atkinson won her second Sportswoman of the Year trophy in two years, following her achievements in the 100m and 200m Butterfly events in the Gold Coast.

Cyclist, Sam Brand was named the Isle of Man Sports Ambassador for 2018. Sam is part of “Team Novo Nordisk”, a professional cycling team consisting exclusively of riders with diabetes.

Fellow cyclist and British Junior Champion, Amelia Sharpe was presented with the Under21 Sportswoman trophy, with Sale Sharks Rugby player, Bevan Rodd picking up the Under 21 Sportsman honour.

Sports Administrator of the Year was won by Richie Stevenson for his work with the Manx Fell Runners, and the Veteran Sportsperson trophy was awarded to Karen Chiarello for distance race walking.

The 2018 Lifetime Achievement award was posthumously presented to Leonie Cooil; she held the position as ‘Chef de Mission’ for the IOM Commonwealth Games team as they travelled to compete in Gold Coast last year before her passing in October. During her life, Leonie was heavily involved in swimming; both competing and coaching and was also an anti-doping educator for Isle of Man Sport. The room was upstanding as Leonie was announced as the winner. Her brother Marcus collected the award on her behalf.

‘Sport is something we are incredibly passionate about, and Microgaming PlayItForward is proud to support the Isle of Man Sports Awards. It was wonderful to see a diverse range of inspirational sports stars across the Island being recognised and celebrated for their hard work, exceptional achievements and successes during 2018, as well as meet so many talented athletes on the night. Congratulations to all the winners and nominees, including Microgaming Ambassador Ben Grainger, and we look forward to seeing what will be achieved in the coming year.’

‘I am amazed each year by the efforts of our Island’s top athletes. They keep making us proud with their performances on the national, international and world stages, and particularly over the past year. Seeing the athletes who have grown through the Isle of Man Sporting pathways, and especially those who have been supported through the Sport Aid programme over the years is a testament to how well the Isle of Man is doing with facilities and backing from the Isle of Man Government.’

The evening also included a presentation of Isle of Man Sport Aid scholarships to up and coming athletes who will receive support through the scheme over the coming year.