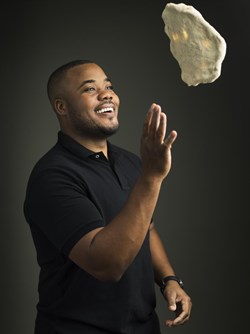 Selasi Gbormittah, a semi-finalist of 2016’s The Great British Bake Off, will be the celebrity guest at this year’s Isle of Man Food & Drink Festival.

The event is sponsored by The Stars Group and will take place at the Villa Marina Gardens on Saturday 14 and Sunday 15 September 2019.

The Isle of Man Food & Drink Festival is organised by the Department of Environment, Food and Agriculture, whose Food Matters strategy is growing the value of food and drink to the economy. Last year just over 8,500 people flocked to the festival contributing £230,000 to the local economy.

Ghanaian Selasi comes from a culture where food plays a huge part in the community. Since competing in The Great British Bake Off he has been involved in commercial branding and events and, most recently, has launched a pop-up bakery through online food delivery company Deliveroo. A keen biker, he set off on Selasi’s Two Wheel Bakery Tour in 2017, visiting bakeries in Belgium, France, Italy, Germany, Spain and Portugal.

‘The Great British Bake Off has millions of viewers each year and Selasi’s personality and baking prowess has captured the hearts of many since his television debut.

‘The festival’s popularity reflects the growth in Isle of Man food and drink, which is being driven by my Department’s Food Matters strategy, and the growing interest and desire among people to support local food and drink producers and businesses.

‘It is exciting that we have been able to secure someone so well-known to attend this year’s festival, and we hope that his enthusiasm will inspire other budding entrepreneurs to realise their potential.

‘He also has a strong following online that we hope will continue to promote Isle of Man food and drink to an international audience, and are certain that he will be an entertaining guest to this year’s festival visitors.’

The festival is also sponsored by Magnet (IOM) Ltd, Isle of Man Meats, Thai Thai Restaurant, Dave’s Delicious Dogs and The Buchan School. Sponsors are still sought for the festival, with a variety of packages available. For information, email the event’s organiser, lucy.verdon@gov.im.