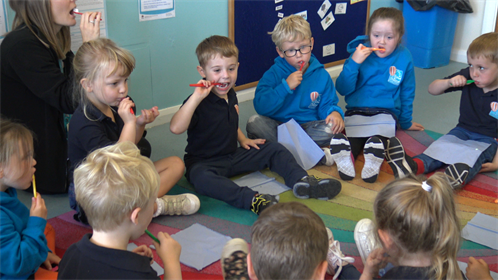 Nurseries in the Isle of Man are teaching young children the right way to clean their teeth and gain tooth brushing skills to last a lifetime, through Public Health’s new Smile of Mann project.

Twenty-three nurseries will include tooth brushing as part of their daily activities from Monday 17 September. Youngsters will be encouraged to take part in supervised sessions where trained staff will show them how to brush their teeth effectively with fluoride toothpaste on a dry toothbrush, and explain the importance of regular brushing. Each child‘s tooth brush with its own colour and symbol is kept in a hygienic case and will be replaced each term.

The Smile of Mann initiative follows a successful pilot project at six nurseries between September and December 2017 to test the feasibility of running a supervised brushing programme in a nursery setting. Feedback from staff and parents showed that children enjoyed the activity and were receptive to simple messages about the benefits of daily tooth brushing.

The project delivers on a Public Health strategy to improve oral health among the Island’s under-fives. Latest figures from Public Health England (PHE) show that 27.8% of five year olds in the Isle of Man have experienced decay – a significant proportion, despite being preventable. A study by PHE concluded that brushing each day at school or nursery over a two year period is effective for preventing tooth decay and helps establish life-long behaviour to improve oral health.

‘As a population, we need to improve the dental health of our young people. Teaching pre-school children to brush their teeth is a simple and effective start, as habits formed at that age often stay with people for life. By introducing daily sessions in nurseries, children see tooth brushing as a fun activity and a normal part of their routine.’

‘It’s too early to say if our pilot scheme has improved the oral health of those who took part, but we saw a general improvement in children’s willingness to brush their teeth and their tooth brushing ability. Our staff and parents also learned from the programme.’

Parents made many positive comments about the pilot scheme in a follow-up questionnaire:

‘My daughter came home showing me what to do.'

‘I’ve seen a marked difference in my son’s ability to properly brush his teeth.'

‘My son has enjoyed brushing his teeth with his friends and he can now tell us how to brush his teeth.'

‘Scheme is excellent – I love the fact that my son now cleans his teeth during the day too.'

‘I think it’s a great idea as it gets them into a routine, and it is no longer a chore at home.'

Kirsten Hall, manager at Parklands Nursery which has joined the Smile of Mann scheme, speaks about the programme in this video:  https://www.youtube.com/watch?v=vIudlE86020