The official launch of the special commemorative coins issued to mark the centenary of Armistice Day at the end of the First World War took place in Douglas today (31 October).

The launch included the presentation of both the distinctive 50 pence coin featuring red poppies and the image of the soldier from the Douglas war memorial, which will be distributed to all those on the Island in full time education, as well as two specially-minted £50 commemorative coins, made from pure silver and decorated with gold-plated poppies. 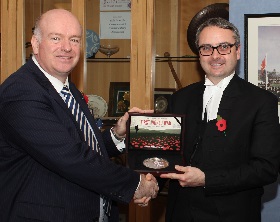 One of the silver coins was presented to Steve Rodan MLC, the President of Tynwald and President of the Isle of Man County Branch of the Royal British Legion. The second was presented to Juan Watterson SHK, the Speaker of the House of Keys. This coin will then be placed in a prominent position within the Legislative Buildings as a permanent reminder of the launch.

The venue was the Millennium Room in the Legislative Buildings with a specially invited audience in attendance. Alongside the President and Speaker were the Chief Minister and the Treasury Minister as well as representatives from the Isle of Man County Branch of the Royal British Legion, including Ray Ferguson, Chairman, and Ann Cottier, Secretary.

Speaking after he was presented with the silver commemorative coin, the President of Tynwald commented:

'I take tremendous pleasure in accepting this wonderful gift on behalf of the Royal British Legion in commemoration of the Armistice. The Legion was established in the aftermath of the First World War to promote welfare and remembrance, and I can’t think of anything more tangible and worthwhile to mark the end of that conflict.'

The 50 pence coin featuring red poppies will be issued to schools and other educational establishments during Monday 5 and Tuesday 6 November, to be issued to the pupils at the most appropriate moment.