New ‘man overboard’ recovery ladders are being distributed to the Isle of Man’s fishing fleet under a grant from the Department of Environment, Food and Agriculture (DEFA).

Also on hand for the presentation of the equipment were the RNLI’s Fishing Safety Manager for the UK and Ireland, Frankie Horne and Chief Executive of the Manx Fish Producers’ Organisation (MFPO), Dr David Beard. 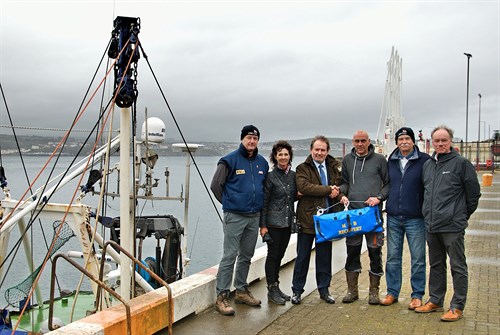 An Isle of Man based fisherman recently joined UK fishermen in a survival exercise at RNLI headquarters in Poole which aimed to highlight the importance of wearing a life jacket at sea. Commercial fishing can be a dangerous industry.  Despite ongoing campaigns and education, between 2010 and 2014 there were 54 deaths in the waters around the UK and Ireland with 59% of fatalities found to have not been wearing a lifejacket, according to the RNLI.

The exercise also highlighted to participants that fishermen often die in the water because they cannot get back on board their vessels – the new ladders being fitted to Isle of Man fishing vessels are specifically designed to assist someone getting themselves out of the water – vital for single-handed vessels – as well as making it easier for crews assisting someone overboard.

'Should a person fall overboard then survival times are short, even in Manx waters. The shock of the cold water will mean their strength is sapped extremely quickly and they may only have one chance to get back on board. These ladders will help to ensure that one chance may be enough. Yachtsmen should also be aware how difficult it is to recover someone who falls overboard and should consider fitting one of these ladders which are available from MFPO.'

The ladders are produced locally in Peel by the MFPO, with each one able to be specially made to fit each vessel.

'The Department looks to support any initiative that can enhance the safety of people working in our fishing industry.

'As is the case in other jurisdictions, grants are available to support this important local industry in a number of areas, such as helping with sustainable fishing, preserving the natural environment or, as is the case here, improving safety at sea.

'DEFA has a good working relationship with the RNLI and the Manx Fish Producers’ Organisation and I am pleased we have been able to work together on this initiative.'

The decision to produce the ladders for the local fishing fleet followed a demonstration of the equipment to Government by the RNLI and the MFPO at a Fishing Industry Safety Group meeting in October 2017.

To date 37 recovery ladders have been distributed to the Island’s fishing fleet.  Ladders are available free of charge to all Manx fishermen under the DEFA grant and anyone who would like one should contact the MFPO on 842114 or iomfishermen@manx.net.