Featuring artwork by local illustrator Alice Quayle, the campaign will appear on social media, at food and drink outlets across the Island, and will be prominent at some of the Isle of Man’s biggest events of 2018 including: the artisan marquee at the TT paddock, the Southern and Royal agricultural shows, and the Isle of Man Food and Drink Festival. 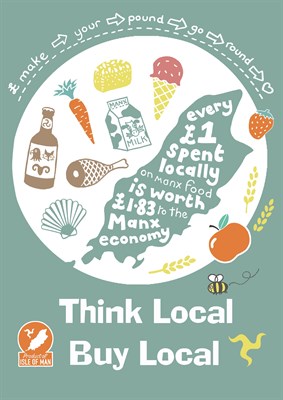 The campaign aims to educate the public about the power of the pound in their pocket by highlighting the ‘local multiplier effect’. This economic theory explains the benefits to an economy when the community ‘shops local’.

It is calculated that every £1 spent on local produce in the Isle of Man is actually worth £1.83 to the local economy. In basic terms the effect comes from the wider benefits that ‘shopping local’ has in job creation and the subsequent growth in consumer spending and tax receipts.

'Over the past decade there has been a phenomenal growth in the number and the variety of local food and drink producers in the Isle of Man. This is a great success story and builds on our ambitious plan to further grow this important and flourishing sector of our economy.

'The spending decisions we all make have a powerful effect on our local economy. The aim of the campaign is to help the Manx public understand the power of the pound in their pocket when they are shopping. Buying local doesn’t just benefit our local farmers and food producers – it benefits the wider Isle of Man economy. If we can get people to stop and think about the potential positive impact of their spending decisions, we can all share in the potential economic benefits for the Isle of Man.'

'The new Isle of Man Provenance label is increasingly being used by local food and drink producers and should provide consumers the confidence that what they are buying is genuinely Manx.'