The search is on for the public’s favourite Isle of Man produce which will claim the title of the new Manx ‘national dish’.

Whether its kippers, queenies, Loaghtan, beef, lamb, or another Manx product – the public has the chance to vote for the food that they feel best represents the Isle of Man.

The vote is being run by the Department of Environment, Food and Agriculture, whose Food Matters strategy is growing the value of the sector to the Island’s economy.

Chef Tony Quirk will feature the winning ingredient at the heart of a dish he will create live at the Isle of Man Food & Drink Festival at the Villa Marina on 15 and 16 September. 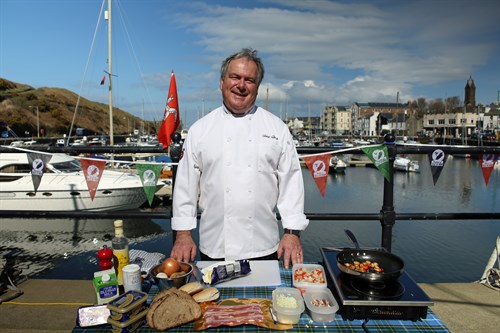 There will be samples to taste and recipes to take away.

The public can see Tony launching the vote – and pick their favourite produce at www.gov.im/food.

The voting is now open with a deadline of Monday 13 August.

'Thanks to our hard-working farmers and food producers, the Isle of Man boasts an array of high quality produce – both traditional and new.

'We are asking the public which product they feel best symbolises Isle of Man food and drink and we will then create a tasty dish around it, which people can also make at home.'

Tickets for the Isle of Man Food & Drink Festival cost just £5 (day) and £8 (weekend) for adults, with admission free for under 16s.

Festival tickets can be booked on the Villa Marina and Gaiety Theatre website from 1 June.