Tynwald Members are being presented with a ‘once-in-a-generation opportunity’ to take strategic control of the Island’s sea services on behalf of the nation.

The Isle of Man Government has negotiated a deal to purchase the IoM Steam Packet Company and bring stability to the ownership of the Island’s lifeline ferry operations.

Treasury Minister Alfred Cannan MHK has tabled a motion for the May sitting of Tynwald, which seeks approval for the Government to commit £124 million to purchase 100% of MIOM Ltd, the parent company of the IoM Steam Packet Company.

A controlling interest in the Island’s ferry services and assets is considered the best way to support the needs of local people and the economy. 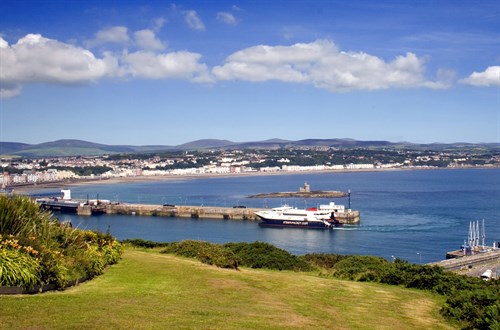 The proposal follows extensive assessment of potential operating models and analysis of the Isle of Man’s current and future requirements, including port facilities and vessels, routes, seasonal demands, additional capacity for the TT period and financial issues.

‘Robust sea links with our neighbours are absolutely vital to the economic and social wellbeing of the Isle of Man. After weighing up a range of options, the Council of Ministers has concluded that we can best safeguard the Island’s strategic ferry services by purchasing the IoM Steam Packet’s parent company.’

‘Our focus throughout this process has been on ensuring safe, reliable and high quality ferry operations. Acquiring this national asset represents a once-in-a-generation opportunity to provide long-term stability for our people and businesses.’

The Isle of Man Government has been considering its options since Tynwald voted in July 2017 to reject the IoM Steam Packet’s revised offer of a new strategic sea services agreement to replace the existing Linkspan User Agreement.

Confidential negotiations have taken place between the Government and MIOM Ltd and its current owners regarding a potential deal. Agreement has been reached on terms and conditions and the acquisition will be progressed if Tynwald Members approve the Treasury motion.

While the move would immediately bring ferry operations into public ownership, the Government has stated that it would not take charge of the day-to-day running of services. The business would be run at arm’s length from Government, with options for either a partner or other investors to be considered in due course after completion. Finances would be restructured to minimise the outlay from Reserves.

The current IoM Steam Packet Company management and staff would continue to run the passenger and freight operations to ensure a smooth transition during the takeover. The proposed deal would help to provide certainty to staff, customers and other stakeholders beyond the expiry of the current User Agreement.

If the Tynwald motion succeeds, the Government would seek to put in place a new strategic sea services agreement within the next 12 months.

‘We believe it is in the best interests of our people and our economy to take a controlling stake in the national ferry operation rather than commit the Island to another long-term agreement with an external provider.’

‘The Government has not been in a position to explain its intentions to the public before now because of the commercial confidentiality of the negotiations. However, we believe we are paying a fair price to secure a profitable, cash generative national asset and gain strategic control of our sea services.’

‘If approved, this deal would consolidate the excellent relationship between the Company and Government and create a strong, long-term platform to deliver continued investment and sea services that meet the needs of the Island. I am confident that these are positive proposals for both the Isle of Man economy and the IoM Steam Packet Company.’