The seventeenth annual Manx Youth Games swings into action next week with over 1,000 children expected to take part in what has become a highlight of the Manx sporting calendar.

Organised by Manx Sport and Recreation within the Department of Education, Sport and Culture and once again generously supported by HSBC, the games take place on Saturday 12 May at the National Sports Centre (NSC) in Douglas.

Children aged between 6 and 15 will make up five teams representing different parts of the Island to compete in 12 sports. 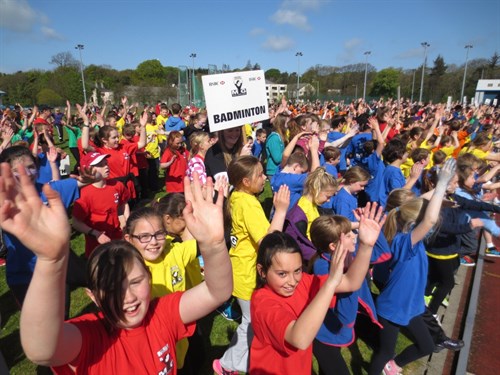 'Sport and recreation are key to the development of children, helping them build confidence, form friendships and improve their social skills.

'The Island’s Strategy for Sport sets a clear ambition to get more people, doing more sport, more often. The best way to achieve that is at a young, grass-roots level in a fun environment.

'The Manx Youth Games is a fantastic way of realising this ambition. The games provide sporting opportunities for our young people whilst at the same time increasing participation through continued involvement in a local sports club and helping coaches to identify emerging talent.

'Sportsmanship is at the heart of the games, with a focus on a safe, positive and inclusive environment, bringing together young people from all over our Island.  It’s an energetic and inspiring day. I look forward to attending and wish all of our competitors the very best of luck.'

The Manx Youth Games began in 2002 and has seen children who were introduced to sports via the games go on to national and international success.

The twelve sports of the games are as follows:

The five teams will be made up of competitors from the North, South, East, West, Douglas North and Onchan, and Douglas South and Braddan.

The games have been supported by HSBC since their inception in 2002 and the bank is backing the event again this year.

'We are committed to supporting our community and so we are immensely proud to continue supporting the Manx Youth Games.

'The games provide an important opportunity for all young people to take part in sport, encouraging them get fit and have fun in the process.'

The opening ceremony will commence at 10am and will see participants parade into the NSC athletics pitch wearing their regions’ colours and perform an aerobic warm-up after which Minister Cregeen will declare the games open.

'I would like to thank HSBC for its continued support, without which the games would not be possible.'