The latest prosecution for illegal fishing in Manx waters sends a strong signal of the Isle of Man’s zero tolerance approach to violations of its fishery legislation says Geoffrey Boot MHK, Minister for Environment, Food and Agriculture.

Mr Anthony John True, master of the fishing vessel Kingfisher BA810, which is owned by West Coast Sea Products Ltd of Kirkcudbright in Scotland, was found to be fishing for king scallops within three nautical miles of the Isle of Man, despite having no permit to do so.

The Kingfisher BA810, with a registered length of 21.03 metres, exceeds the maximum size of 15.24 metres permitted for vessels fishing within the first three nautical miles of waters from the Island’s shores. 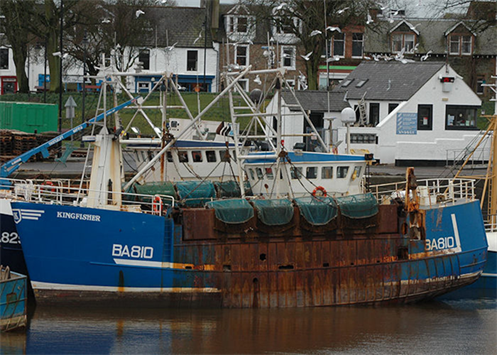 The Department of Environment, Food and Agriculture has taken the decision to suspend the Isle of Man sea fishing licence for the Kingfisher BA810 for a period of three months of the king scallop fishing season.

A policy to suspend or cancel licenses, where there is reasonable grounds to suspect that an offence may have been committed, was introduced last month.  The new measure provides an additional enforcement tool, serving as an alternative to the ‘report to port’ system that was temporarily introduced at the start of the year to address concerns raised about misreporting of king scallop catches.

Following reports of illegal fishing by the vessel received on 11 November 2017, fisheries officers within the Department of Environment, Food and Agriculture carried out an investigation.

Data collected from the Kingfisher BA810’s vessel monitoring system (VMS) showed it had been fishing 650 metres inside the 0-3 mile limit.

In court, the defendants were apologetic, claiming that it was a genuine mistake and the vessel strayed for only an hour within the prohibited three mile area.

'We work tirelessly to protect the Island’s fishing grounds to ensure their long term sustainability. This work is vital to ensure we can sustain and grow the £20 million contribution fisheries makes to the Isle of Man’s economy each year.

'Our policy and approach can only be a success if everyone adheres to the rules and understands that these will be rigorously enforced.

'This is the first time we have suspended a licence to fish for king scallops. It is a powerful tool, ensuring the offender pays rather than those who play by the rules.

'The Department has a zero tolerance approach to violations of the law and actively purses prosecutions. No one should be in any doubt how seriously we take our custodianship of our territorial seas.'

Any breaches of regulation made under the Fisheries Act 2012 may result in a fine of up to £100,000, forfeiture of catch, boat and or gear. The court may also, upon conviction, disqualify a person from holding a fishing licence.