The Island has hosted a visit from the head of the education section at China’s embassy in London.

Mr Wang Yongli was shown some scenes from the school’s upcoming production of Honk, as well as an exhibition of art and photography by A-level students.

Headteacher Adrienne Burnett gave a tour of the school which included a visit to the Confucius classroom where students and the wider community can study the Chinese language and the culture of China. 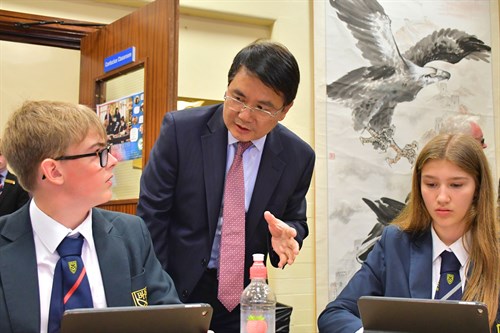 Over 150 BHS students study in the Confucius classroom as part of their lessons or an after school club, with more than 50 students attending Chinese language clubs at other secondary schools on the Island. In addition over 450 primary school pupils have had a six week introductory course to Chinese language and culture.

Since 2006 more than 200 Island students have visited China as part of an annual exchange programme, with a similar number making the journey from China to the Isle of Man.

Dhoon School was the second stop for the visit, where Mr Wang Yongli was able to get a broader understanding of primary education in the Isle of Man. He was greeted by pupil ambassadors Thomas Woolley and Abigail Harvey. After a tour, the school choir performed ‘Ellan Vannin’ in the hall and pupils from Class 3 presented Mr Wang Yongli with gifts to commemorate his visit.

As part of the visit talks were held between Mr Wang Yongli, Minister for Education, Sport and Culture Graham Cregeen MHK, and other officials on future educational collaboration between China and the Isle of Man.

'It has been a pleasure to host Mr Wang Yongli on his visit to the Isle of Man. He has been keen to learn about our education system and to explore how we can further strengthen relations between the Island and China.  He has remarked how impressed he has been with what he has seen and how favourably our education facilities and system compare to other jurisdictions he has visited.

'China is a huge economy and an increasingly significant global player.  Government is keen to nurture the growing links between our two nations which is why I invited Mr Wang Yongli to visit the Island when I met him in London earlier this year.

'Through strengthening links and initiatives such as the Confucius classroom we provide our young people with opportunities to learn about Chinese culture and language, and in doing so better equip them for a global future.'

During his visit Mr Wang Yongli also learnt more about higher education in the Isle of Man with a tour of some of the facilities at University College Isle of Man including the William Kennish Engineering Building and the Bailey Scott Construction Building.

'I was impressed with the Isle of Man’s education system and I appreciate Minister Cregeen’s hospitality.

'The Confucius classroom is the beginning of our educational cooperation. I look forward to establishing a long-term relationship for educational collaboration between China and the Isle of Man.'

The visit concluded with Mr Wang Yongli viewing part of Tuesday’s sitting of the House of Keys.