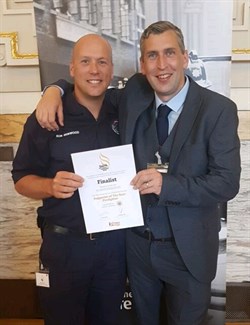 The charity’s regional co-ordinator for the Isle of Man for the past five years, Rob was nominated by a colleague in the supporter of the year - firefighter category.

He was delighted to attend the ceremony, accompanied by his mum, Sue, at One Great George Street in Westminster on June 21, where he was named as one of the runners-up.

The Firefighters Charity was established during the Second World War to assist bereaved families of men killed fighting blazes during the Blitz, and marks its 75th anniversary this year. Today the charity provides support and a range of health and wellbeing services for firefighters and their families across the UK and Isle of Man.

Since being in post Rob has staged a range of events, helped to raise lots of money and developed strong relationships with charity partners.

The awards ceremony celebrated the fundraising efforts of people from across the UK. London Fire Brigade Commissioner Dany Cotton, who collected a special recognition award, spoke movingly of the effects of the Grenfell Tower disaster and the work the charity had done in response.

After the presentation, the attendees walked the short distance to Downing Street where they were received at a special event by Mr Javid.

‘It was an amazing accomplishment to simply get nominated and be able to attend the ceremony. So many people do so much good work, it was humbling to be in their company.

‘The charity does support Manx firefighters when necessary and it’s important to highlight this, particularly in regard to rehabilitation and getting back to work quickly following physical injuries, but increasingly in the areas of mental health issues and post-traumatic stress disorder.

‘I don’t do the work all on my own - every station across the Island raises money for the charity through their own events and open days and coffee mornings.’

‘I am delighted that Rob was justly recognised as one of the five finalists at the recent awards ceremony. His continual fundraising work and personal commitment to the Firefighters Charity has been outstanding and he deserves this credit’.

‘Congratulations to Rob, and to everyone in the Island who helps to raise money for this important charity. The work it does is vital in supporting firefighters and ensuring emergency services continue to be available every day of the year.’