The inaugural board meetings of the new Finance Isle of Man, Digital Isle of Man, Business Isle of Man, and Visit Isle of Man Executive Agencies have now taken place, with 50 private and public sector leaders participating across the four boards. The development of the four Agencies follows the restructuring of the Department into a significantly smaller and more focused organisation. This is now complemented and enhanced by the new Agency model, blended with the commitment and experience of Departmental staff.

‘I am delighted to announce the board members of our four Executive Agencies, signalling the completion of our Departmental organisational and business transformation and the beginning of our journey as a dynamic private/public partnership. The root and branch review of the Department has resulted in a significantly smaller and more focused structure that better represents our modern and diverse economy.

‘It has been really encouraging to see the level of commitment and engagement from such a broad scope of private sector members and I’m hugely appreciative of the time volunteered and the enthusiasm for our Island. With the first meetings complete we are already seeing the consideration of key elements of the Island’s future around areas of product development, policy input, and promotional activity.

‘It is intended that together the boards will contribute to a centralised Economic Advisory Board that will feed directly into the National Strategy Group, impacting decisions and direction at the most senior level. This clear and inclusive process will help us deliver our mission in creating an environment, through innovation and collaboration, where the economy thrives.’

Finance, Digital, Business and Visit Isle of Man are private/public Executive Agencies within the Department for Enterprise. The Agencies are led by experienced, senior professionals, acting as non-executive Chairs, on a part-time basis, accompanied by each Agency’s most senior government officer.  In addition to the industry board members, who all have voting powers, each Agency board is attended by the Department for Enterprise’s Chief Executive, Mark Lewin and an in-house marketing business partner – these are non-voting positions. 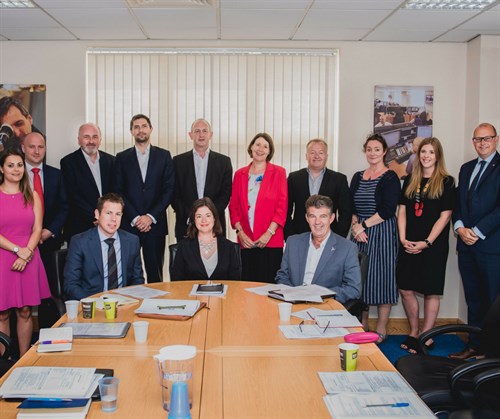 Visit Isle of Man is chaired by Ranald Caldwell, accompanied by the Head of Agency, Angela Byrne, and the Agency’s political member, Mr Rob Callister MHK.