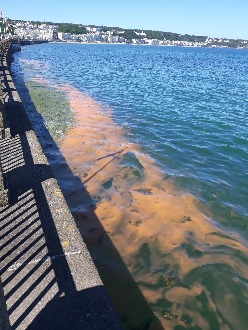 The public are being reassured that patches of red sea water that have been spotted around parts of the Island over recent days – particularly at Douglas, Laxey and Ramsey bays – are a natural phenomenon and there is no cause for concern.

Scientists at the Government Laboratory, operated by the Department of Environment, Food and Agriculture, have analysed samples and confirmed the discolouration is caused by a type of algae, Noctiluca scintillans.

'A number of people have raised this issue with me over the past few days and I hope this explanation of what is a perfectly natural event provides clarity.'

'This particular algae is non-toxic and regularly blooms during the summer months in the Irish Sea.

'This species has some interesting traits. For example, it is a plant that does not rely on photosynthesis to feed itself. Instead it engulfs other microscopic organisms to gain nourishment – so it’s a plant that eats other plants.

'The species name Noctiluca means ‘shines by night’ and the blooms of the organism around the Island may provide some spectacular bioluminescence along the shore line at night. The plants are able to emit light when agitated, possibly as a defence mechanism to stop themselves from being eaten.

'These light emitting properties are reflected in the species’ common names which are ‘Sea Sparkle’ or ‘Fire of the Sea’.'

Whilst the alga is non-toxic it is possible that dense blooms will also congregate other organisms such as jellyfish which will feed on Noctiluca. The public are therefore advised to avoid swimming through patches of water that are clearly discoloured.