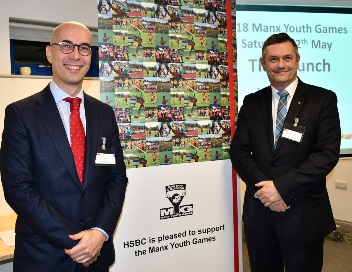 The importance of children exercising from an early age has been outlined by Graham Cregeen MHK, Minister for Education, Sport and Culture.

The event, run by Manx Sport and Recreation (MSR), takes place at the National Sports Centre (NSC) and other venues on Saturday 12 May.

‘The Games enable thousands of children to try sports they might not have experienced in a fun and non-competitive environment,’

‘It’s a fantastic sight to see excited participants parade into the NSC wearing their region’s colours, with their mascots and banners, take part in the warm-up and then disperse for a packed day’s events.

‘The Programme for Government and our Strategy for Sport outline the importance of our population engaging in exercise and it’s important we encourage children to enjoy sport from an early age. It boosts mental and physical health and leads to lifelong hobbies and friendships.

‘The Games also bolster the number of people getting involved with community clubs and events, as athletes and officials, and is one of the reasons grass roots sport is so strong in the Island,’

‘HSBC has generously supported the Games since their inception and we are indebted to them for their involvement in growing it to the event it is today – a major highlight of the school and sporting year.’

‘HSBC is extremely proud to continue our support for the Manx Youth Games.  Over the years the games have grown into a fantastic event which encourages young people to engage in different sporting activity. It is a privilege for HSBC to be involved in the Games and be committed to the community on the Island.’

Manx Sport and Recreation will visit schools this month to screen a video of last year’s event and distribute information about involvement.

Children can then participate in regional training sessions.

Photos: Jaime Amoedo, Country Head of Corporate and Commercial Banking, HSBC Isle of Man, and Minister for Education, Sport and Culture, Graham Cregeen MHK. Coordinators of some of the sports offered at the 2018 Manx Youth Games.