The national event celebrates the role local servicemen and women have played in conflict and peacekeeping the world over.

It incorporates a march along Douglas’s promenades, which sees the public turn out in large numbers, a service of thanksgiving in the Villa Marina Royal Hall and an afternoon tea and evening of entertainment.

Many serving personnel return home as guests of honour at the event. 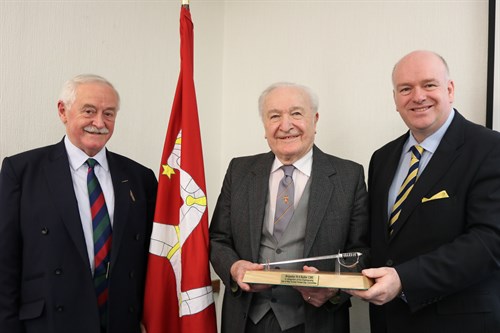 Armed Forces Day is organised by a committee comprising veterans of all the Island’s ex-service organisations and has the patronage of the Lieutenant Governor, the President of Tynwald and the Chief Minister.

‘The Isle of Man has a long and proud history of its citizens serving in wars and conflicts.

‘Armed Forces Day allows us to give thanks for the contribution made by our brave men and women in troubled parts of the world, both past and present. The day is always impeccably observed in the Isle of Man.

‘I hope people will note the 2018 date and participate in the same numbers as always.’

Advertisements advising people how to apply for tickets for the thanksgiving service will appear in May.

At today’s meeting of the Armed Forces Day committee, tributes were paid to Brigadier Norman Butler, who was instrumental in founding the event and has chaired the organising committee since it was formed 11 years ago.

Chief Minister Howard Quayle MHK presented the Brigadier with a gift on behalf of the committee. He said:

‘Armed Forces Day has gone from strength to strength and it is poignant to be present on the last Sunday in June to pay tribute to personnel past and present.

‘Every successful chairman needs a good committee and much credit for the event goes to those hardworking members around the table – and who have gone before or are sadly no longer with us.

‘However, without the Brigadier’s passion for the role, sound leadership and judgment and unparalleled contacts across the armed forces world, Armed Forces Day Isle of Man wouldn’t be what it is today.’

‘Brigadier Butler has made an outstanding contribution to many aspects of public life, most notably as MHK for Ramsey.

‘He has worked tirelessly over many years to ensure the efforts of the Island’s armed forces community are advanced. Under his chairmanship, Armed Forces Day has evolved into a wonderful celebration of the Manx and military partnership.

‘As past vice chairman, Major Wilson is well placed to pick up the reins. I know he will be an enthusiastic chairman and I look forward to working with him in this role.’