A six month trial allowing offenders at the prison to use e-cigarettes has produced a raft of benefits for offenders and staff.

The pilot scheme between April and October 2017 was the result of a partnership between the Prison and Probation Service and the Public Health Directorate. This allowed offenders to purchase a controlled weekly supply of specialist e-cig devices, as a substitute for nicotine replacement patches which were previously supplied to prisoners.

The Isle of Man Prison became the first in Europe to introduce a ban on smoking in 2008, putting it at the forefront of efforts to improve offender health and reduce harm caused by secondhand smoke.

This presented significant challenges, including discipline of those offenders determined to continue smoking, and related safety issues. Offenders devised ways to smoke tea bags, banana skins and other items mixed with nicotine soaked from the patches, resulting in staff and offenders’ continued exposure to secondhand smoke. 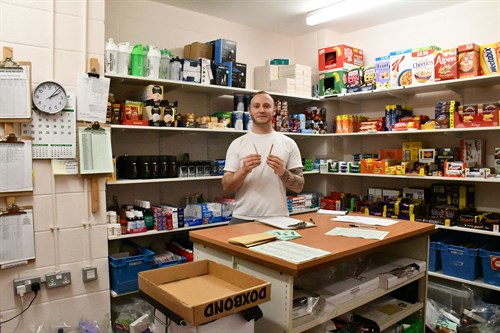 While enforcement remained an option, Home Affairs Minister Bill Malarkey approved the introduction of e-cigs on a trial basis as a practical, fair and progressive approach.

An evaluation of the pilot project shows a positive result in key areas:

The e-cig pilot scheme has done more than offer a tobacco alternative - it has prompted significant interest among prisoners for smoking cessation advice.

More than 25% of newly received offenders requested help to quit smoking during the trial – compared to 0% pre-trial.

Nicotine replacement therapy patches which were being misused by some offenders, were withdrawn when the trial began, leading to an annual saving of at least £8,500. Offenders must work in order to pay for their e-cigs.

'The e-Cigarette pilot scheme at Jurby prison is a major success story for the Isle of Man. A problem has been solved. We have better behaviour, a calmer, cleaner and safer environment. Impressive numbers of offenders have asked for help to stop smoking altogether – an unexpected bonus which will drive our future approach.'

‘This pilot has proved an all-round success. Our ban on smoking in the prison, in line with wider efforts in society to prevent the harmful effects of tobacco, was a bold decision. We knew there would be resistance. We have listened to feedback. The introduction of e-cigs is a progressive step which is generating benefits.

‘I am delighted the project has led to numbers of people wanting to give up smoking for good. This is an encouraging trend which will be explored further by policy makers and health professionals.’

The trial has been endorsed by the chairman of the Independent Monitoring Board Bob Ringham, who said:

‘The atmosphere within the prison is significantly better from both the health and attitude point of view. On the health side the wings smell fresh, there is no lingering smell of smoke as you walk around and the potential for electrocution or fire is greatly reduced.’

‘To remove this now would be a major retrograde step and as a Board we hope that the controlled use of e-cigarettes will become part of the normal prison regime’.

The comments of prisoners underline the transformational effect of the introduction of e-cigarettes.

‘I used to smoke every day of the week and didn’t think about quitting. Now I’ve quit because it (e-cigarettes) was too expensive. It was better for me, no doubt about it. I’m 29 now and I’ve been smoking since I was 13. It’s a good environment to quit smoking, especially now that e-cigarettes have come in’

The pilot suggested improvements to ongoing oversight of e-cigarette supply in the prison. In future there will be stricter monitoring of the possession of e-cigarettes, and as a result of a partnership with manufacturers, devices will carry unique batch codes as an additional security feature.

Extensive research has established a wide consensus around the use of e-cigarettes as a replacement for tobacco: Public Health England has concluded they are 95% less harmful than normal cigarettes. Offenders will continue to have access to a controlled supply of e-cigs at Isle of Man Prison for the foreseeable future.

‘I am delighted to see the positive outcome of the pilot and I endorse in the strongest possible terms a continuation of this approach.'